V-22 Osprey: Israel's Military Could Become Even Deadlier Thanks to This 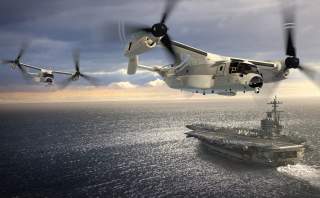 After years of discussion on what should be ordered as a replacement/addition to the UH-60A Yanshuf and the CH-53 2025 Yas’ur, it looks like the Israeli Defence Ministry has taken the next step.

As reported by Aviation Week, the Israeli Defense Ministry has issued a price and availability request to the U.S. Navy’s international programs office for the acquisition of the Boeing V-22 aircraft.

This step in the long-delayed acquisition of the tilt-rotor was finally taken after Lt. Gen. Aviv Kochavi, chief of staff of the Israeli Defense Forces (IDF), decided that it has an operational need for 12 to 14 V-22 Osprey aircraft.

Furthermore, according to Scramble Magazine, an Israeli Air Force (IAF) delegation of pilots and project officers is expected to travel to the US in September 2019 for “tests and evaluations” on the Lockheed Martin CH-53K King Stallion and the Boeing CH-47 Chinook as a replacement for the Yas’ ur.

The Boeing V-22 is a joint service, multi-mission aircraft with vertical take-off and landing (VTOL) capability. It performs VTOL missions as effectively as a conventional helicopter while also having the long-range cruise abilities of a twin-turboprop aircraft.

The U.S Marine Corps (USMC) is the lead service in the development of the Osprey. The USMC version, the MV-22B, is an assault transport for troops, equipment and supplies, and will be capable of operating from ships or from expeditionary airfields ashore. CV-22B is the U.S. Air Force Special Operations Command (AFSOC) variant of the USMC MV-22B Osprey

Gabriele Barison is an aviation, defense and military writer. He is the Co-Founder and Editor of “The Aviation Geek Club” one of the world’s most read military aviation blogs. He has flown Super Puma and Cougar helicopters with the Swiss Air Force.