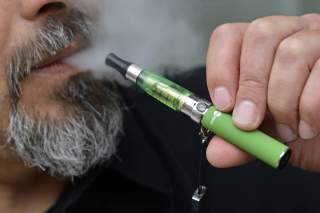 Bacteria commonly found in the lungs become more harmful and cause more inflammation when they have been exposed to e-cigarette vapour, in a way that could lead to diseases such as COPD and asthma.

Chronic lung disease results from a complex interplay between infection and inflammation, which can be further complicated by the toxic effects of cigarette smoke. We know that cigarettes are bad for us and, as a result, many smokers have switched to vaping instead.

But is vaping less harmful than smoking? This question has divided specialists in the field. Some, including Public Health England, maintain that vaping is less harmful and a useful way to help people stop smoking. But others, including the European Respiratory Society, argue that the evidence suggests that rather than helping, e-cigarettes are undermining people’s attempts to give up smoking.

The number of people vaping has increased dramatically in recent years. Figures from the World Health Organization show a rise from 7 million in 2011 to 41 million in 2018. And this increase isn’t solely accounted for by people switching from smoking to vaping. According to a recent US study, around 27% of high school students now vape, many of whom aren’t smokers.

The huge variety of flavours, sleek vaping devices and a social media presence contribute to making vaping more socially acceptable among young people. For this large group of vapers but non-smokers, safety comparisons between smoking and vaping are irrelevant – what they need is more information about the direct effects of vaping.

Bacteria play a role in the development of smoking-related lung diseases, such as bronchitis and pneumonia. Our research looked at the usual suspects in lung infection (Haemophilus influenzae, Streptococcus pneumoniae, Staphylococcus aureus and Pseudomonas aeruginosa) and investigated the bacterial responses that had the potential to increase harm and cause long-term infection. Bacteria, grown in the laboratory, were exposed to either cigarette smoke or vape.

In chronic infections, bacteria are often found in large aggregates, called biofilms. Biofilms represent a real challenge when it comes to getting rid of infection: they are physically hard to remove, more resistant to antibiotics and harder for the body’s immune system to tackle. We found that exposure to either cigarette smoke or vape resulted in an increase in biofilm formation.

Also, when these bacteria were exposed to smoke and vape, it increased the inflammation in lung cells. In some cases, the effect following vaping exposure exceeded that of cigarette smoke exposure.

We also compared the survival of Galleria mellonella (wax moth larvae) following infection with vaped, smoked and unexposed bacteria. This is a well-established model that uses wax moth larvae to measure whether bacteria are likely to cause harm. Exposing bacteria to vape or smoke made the bacteria more virulent in the larvae.

Not quite real life, but still…

As with all studies, ours had limitations. Although our lab-based experimental procedures aimed to mimic smoking and vaping as closely as possible, it probably doesn’t exactly capture how people smoke and vape in real life.

We used a basic flavourless nicotine-containing vape and a commonly used e-cigarette. But in reality, there is a wide range of devices and thousands of e-cigarette flavours. Indeed, some flavours have been particularly associated with lung damage.

Also, we only “vaped” or “smoked” bacteria once and didn’t measure the effect of long-term exposure. Vapers take deeper puffs than smokers and so we probably didn’t expose our bacteria to high enough levels of vape, so it’s possible that the effects of vape might be greater in the lungs.

So what does this study tell us about vaping safety? Exposing bacteria to vape is likely to make already harmful bacteria more dangerous and carry the same risk as exposure to cigarette smoke.

We urgently need to know more about what the long-term effect of vaping is, not just directly on the lungs but on the bacteria that might contribute to the development of diseases, such as COPD and asthma, so that the public can make an informed choice about whether to vape.