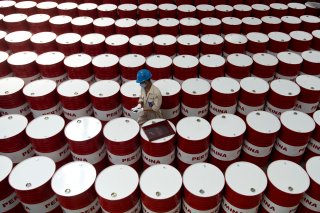 Venezuela is known to be the home to the world’s largest oil reserves with three hundred four billion barrels, which represent a sizeable 17.5 percent share of the entire global market, according to the BP Statistical Review of World Energy 2020.

However, petrostates like Venezuela are believed to be highly vulnerable to what many economists call “Dutch disease,” a term coined during the 1970s after the Netherlands discovered natural gas in the North Sea.

According to a recent report by the Council on Foreign Relations (CFR), in such an “afflicted country, a resource boom attracts large inflows of foreign capital, which leads to an appreciation of the local currency and a boost for imports that are now comparatively cheaper. This sucks labor and capital away from other sectors of the economy, such as agriculture and manufacturing, which economists say are more important for growth and competitiveness.”

It continued: “As these labor-intensive export industries flag, unemployment could rise, and the country could develop an unhealthy dependence on the export of natural resources. In extreme cases, a petrostate forgoes local oil production and instead derives most of its oil wealth through high taxes on foreign drillers. Petrostate economies are then left highly vulnerable to unpredictable swings in global energy prices and capital flight.”

There appears to be a huge toll on governance as well. Since petrostates are more reliant on “export income and less on taxes, there are often weak ties between the government and its citizens. Timing of the resource boom can exacerbate the problem.”

“Most petrostates became dependent on petroleum while, or immediately after, they were establishing a democracy, state institutions, an independent civil service and private sector, and rule of law,” Terry Karl, a professor of political science at Stanford University and author of The Paradox of Plenty, told CFR.

“Oil continues to play the dominant role in the country’s fortunes more than a century after it was discovered there,” CFR wrote. “Oil prices plunged from more than $100 per barrel in 2014 to under $30 per barrel in early 2016, sucking Venezuela into an economic and political spiral. Conditions have only worsened since then.”

Other numbers continue to back up the grim story, such as the South American country having an estimated debt burden of $150 billion or higher and oil sales making up 99 percent of export earnings and roughly one-quarter of gross domestic product (GDP). Between 2014 and 2019, the GDP contracted by about two-thirds, and experts predict that—with lower demand for oil amid the ongoing coronavirus pandemic—it would plunge by another 30 percent. Moreover, annual inflation is running at a whopping 6,500 percent.

“These issues—coupled with international sanctions and the coronavirus pandemic—have fueled a devastating humanitarian crisis, with severe shortages of basic goods such as food, drinking water, gasoline, and medical supplies,” the CFR wrote, adding that according to a recent survey, 96 percent of Venezuelans live in poverty, the highest percentage among all countries in Latin America.