Ventilators vs. F-35s? Could America's Military Dollars Be Better Spent At Home? 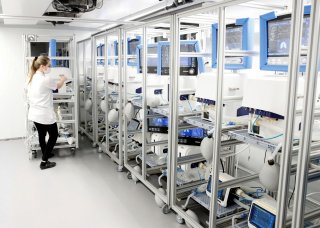 As the United States struggles to contain the coronavirus outbreak, it has revived the perennial guns versus butter debate. Or, in this case, guns versus medical equipment. Might some of the money spent on the U.S. military have been better spent on more useful things closer to home? Might a few million additional N‑95 masks have protected more Americans than a few additional M1 Abrams tanks? Might the money spent on even a single F‑35 fighter plane have saved more lives — in April and May of 2020, at least — if it had been used to buy a few thousand more ventilators?

Such questions were barely on the table less than two months ago. On February 10, 2020, the Trump administration submitted its budget proposal for Fiscal Year 2021. It called for $740.5 billion for national security, of which $705.4 billion was for the Department of Defense. The accompanying press release outlining the rationale for this spending didn’t mention infectious diseases or coronavirus or anything pertaining to protecting public health. That isn’t so surprising: the Pentagon is rarely called upon to deal with domestic threats – and most Americans don’t want it to. But at the time of Secretary of Defense Mark Esper’s announcement of the FY21 budget request very few could have imagined that, by late March, thousands of military personnel would be scattered around the United States constructing and staffing make‐​shift hospitals.

Many aspects of the U.S. government’s response to COVID-19 merit scrutiny. There will be a thorough review of policies and procedures that might have slowed the spread of the virus. But, for now, the focus is and should be on stopping the further spread of the disease and caring for those who have contracted it. Such measures require several key pieces of protective equipment, from N‑95 masks to gloves and gowns. Testing kits and thermometers are needed to separate the healthy from the sick. And hospital beds and ventilators are needed for those who fall ill. Shortages have prompted governors and mayors to appeal for help from the federal government, but also from foreign governments. Michigan, which as of 3 pm on April 6, 2020, had reported 17,221 confirmed cases, and 727 deaths from the disease, last week requested over 20 million N‑95 masks and 25,000 ventilators. Massachusetts secured 1.2 million N‑95 masks from China, delivered by the New England Patriots’ team plane.

Surveying that budget request from two months ago, the Trump administration had asked for $11.4 billion to purchase 79 F‑35 Joint Strike Fighters, $3.5 billion for 2 Arleigh Burke destroyers for the Navy, and $1.5 billion to modernize 89 M‑1 Abrams tanks.

By way of comparison, then, and using high‐​end estimates for the medical devices, for the cost of a single F‑35 ($144 million), we could have purchased at least 2,800 ventilators.

Last month, Maryland Governor Larry Hogan called on hospitals to quickly expand the number of beds in the state. Six hospitals reported that it would cost nearly $40 million to add 340 by May 1st. At that rate, the one Navy destroyer in the Trump administration’s budget ($1.75 billion) costs as much as 14,870 hospital beds.

And it would cost less to purchase 17 million N‑95 protective masks (at the pre‐​gouging price) than what U.S. taxpayers are being asked to spend to modernize a single Abrams tank (the one the Army doesn’t want).

This obviously isn’t apples to oranges. National defense is a vital government function, while health care is both a public and private undertaking. What Americans spend to keep themselves healthy varies dramatically. Many of those dollars come out of our pockets, or from the third‐​party payers we rely on to cover our health care costs – whether that is a private health insurer or the federal government.

But the government has a role to play in protecting public safety, and when the leading threat to public safety is right here at home, and not susceptible to military solutions, it is appropriate to redirect some of the money that was intended for the Pentagon to these other, more urgent, needs.