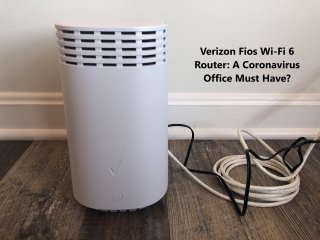 It often seems that 5G garners most of the headlines, but what can get lost in the shuffle is the newest and fastest version of Wi-Fi, which is called Wi-Fi 6.

Verizon is a leader in this new technology, and through its Fios Wi-Fi 6 Router, it hopes to reach the masses and enable them to fully enjoy 5G and faster and broader coverage.

If you’re only looking for speed, you’re definitely in luck. Wi-Fi 6 has been shown to achieve wireless transfer speeds as high as 1,500 Mbps, or 1.5 Gbps, which is about 60 percent faster than Wi-Fi 5. It’s indeed a huge boost even from Verizon’s own previous routers, as the top speeds are now about 60 percent faster and boast 63 percent wider coverage.

Speed and coverage are surely important, but what the Fios Wi-Fi 6 really excels in is its ability to handle multiple devices. Today, with the constant use of smartphones and tablets to laptops and home security systems, many of the older routers have a hard time keeping up.

“As more and more people adopt smart home technology and connect more devices, the need for a reliable router that provides more coverage throughout the home has become a necessity,” Heather McDavitt, vice president of Verizon Consumer Products, said in a press release. “Verizon’s new Fios Home Router and companion Fios Home Wi-Fi Extender are the perfect solutions for Fios customers who want to blanket their home with powerful and secure Wi-Fi.”

The Fios Wi-Fi 6 features a 2.4GHz network and two separate 5GHz networks, which have become the standard for most Wi-Fi users as they are indeed faster, although they do have a shorter range and have a harder time going through certain walls. One of the 5GHz networks can be used for a dedicated Wi-Fi 6 backhaul connection between the router and Fios Home Wi-Fi Extenders. Those extenders build a mesh network that can provide stronger Wi-Fi signals all throughout a home.

Make sure to keep in mind that the Fios Wi-Fi 6 can only transmit data as fast as your internet plan allows, so you may have to upgrade to a more expensive plan if you really want to see a difference. Moreover, although these routers are compatible with older Wi-Fi devices, the faster speeds will only benefit devices that support the new Wi-Fi standard.