Very Lucky: This Israeli Fighter Pilot Landed with Only One Wing 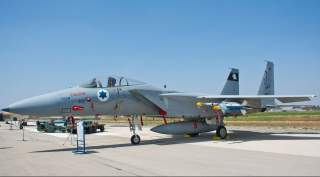 According to uss-bennington.org, Nedivi managed to bring his F-15 to a complete stop approximately 20 ft (6 m) from the end of the runway.

The A-4 pilot had to eject from his aircraft since it was irremediably damaged.

Instead the right wing of the Baz was sheared off roughly 2 ft (60 cm) from the root.

Zivi Nedivi (pilot) and Yehoar Gal (navigator), the F-15 crewmembers, did not initially realize the extent of the damage, as fuel leaking profusely and vaporizing at the wing attachment was obscuring their view of the area where the wing once was.

As explained by Shlomo Aloni in his book Israeli F-15 Eagle Units in Combat, the Baz started rolling uncontrollably after the collision. Nedivi lit the afterburner, and eventually regained control of the aircraft. He was able to maintain control because of the lift generated by the large areas of the fuselage, stabilators, and remaining wing. Diverting to Ramon Airbase, the F-15 landed at twice the normal speed to maintain the necessary lift, and its tailhook was torn off completely during the landing.

According to uss-bennington.org, Nedivi managed to bring his F-15 to a complete stop approximately 20 ft (6 m) from the end of the runway. He was later quoted as saying “(I) probably would have ejected if I knew what had happened.” However, he also stated that above a certain speed, the F-15 acted “like a rocket” and did not need wings, effectively becoming something similar to a lifting body.

The F-15 that was nicknamed Markia Schakim (Sky Blazer) and belonged to 106 Squadron, was transported by road to an IAF maintenance unit at Tel Nof, where it was repaired.

The aircraft would eventually be repaired and after having scored three air-to-air victories (in the form of three Syrian fighters, one MiG-21 and two MiG-23s) during the 1982 Lebanon War, the Baz shared the kill of another Syrian MiG-23 on Nov. 19, 1985.

In the following video Zivi Nedivi explains how he was able to land F-15D No. 957 with most of its right wing missing.