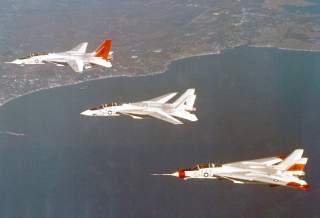 Noteworthy the troubles with the original Tomcat engine, the Pratt & Whitney TF30 were well publicized because of their propensity to cause stalls/spins as a result of airflow-induced engine stalls.

The impressive video in this post shows F-14A crewmembers ejecting from their Tomcat after flat spin testing went wrong.

According to former F-14 Tomcat pilot Gregory Quist comment to the video “The test center had deemed Tomcat un-spinnable when I went through training in 1975-76. We as students were instructed to try and spin on one of our lesson flights. . Couldn’t spin the jet no matter how hard one tried. Only a nose down high buffet fully controllable spiral evolved in such attempts. I was told this test crew in this test ground camera video, after their normal test flight, decided they had extra gas to go to higher altitude and try this unplanned (since Tomcat “couldn’t be spun’ by PAX test center). The thinner air allowed it to spin. […] I heard they got in a little trouble for doing things unplanned. Anyway, that was the scuttlebutt at the time whether true or not.”

Noteworthy the troubles with the original Tomcat engine, the Pratt & Whitney TF30 were well publicized because of their propensity to cause stalls/spins as a result of airflow-induced engine stalls. As told by Grumman’s Chief Test Pilot Kurt Schroeder to Lou Drendel for his book Tomcat – Modern Military Aircraft series, “An engine stall creates two concerns: an immediate loss of thrust and potential damage to the engine. Damage to the engine results when the engine fuel control senses a deceleration in commanded compressor speed caused by the stall and tries to compensate for it by adding fuel. Without pilot action, the additional fuel combines with the disrupted airflow can quickly result in damaging turbine inlet temperatures. The loss of thrust produces a yawing moment which is normally easily countered by the aerodynamic stability for the aircraft. The airframe stability, however, varies as a function of airspeed and angle-of-attack and if a large thrust asymmetry exists (i.e. one engine in full afterburner with the other stalled) in an area that the aerodynamic stability is low, thrust will dominate. Without pilot corrective action, the aircraft could be driven into a departure from controlled flight and possibly into a spin.”

According to Schroeder, proper pilot corrective action would have been to reduce the thrust asymmetry and apply flight control inputs to counter the yawing moment. “While the aircraft retains very strong recovery control power, even in severe departures, prompt and correct application of the proper controls is difficult for the fleet pilot because of the disorienting nature of departures from controlled flight. Procedures which are easy to apply in a benign environment become much more than a challenge when suddenly subjected to the rapidly changing attitudes and accelerations of uncontrolled flight.”

As told by Shroeder these kind of problems were resolved with the incorporation of the General Electric F110-GE-400 engines in the F-14B/D. “An example of the confidence we have in the recovery capability of the F-14 is a program we flew to evaluate the operability and asymmetrical thrust effects of the F110GE-400 engine. To accomplish the program objectives, intentional departures from controlled flight test were required. While this type of work had been conducted during several programs with the TF30 powered aircraft, the test aircraft had always been equipped with a spin recovery parachute, deployable spin-recovery forward canards, special pilot escape provisions and an emergency power system for hydraulic and electrical power. The immediate problem was that an F110 powered F-14 equipped with these provisions did not exist and to modify one would require unavailable time and money. The question was then raised: ‘Could we conduct the program with essentially an unmodified aircraft?’ After many discussions between Grumman and NAVAIR, the decision was made to proceed. Over 300 successful recoveries following the same number of intentional departures confirmed the confidence. […] The F110 has tremendous stall margin everywhere […]. When you are maneuvering with the F110 engines, you can do whatever you want to do, whenever you want to do it.”