Video Alert: Watch an F-35B Land Vertically on a Moving Carrier for the First Time 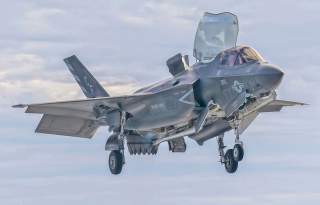 According to Save The Royal Navy, during SRVL the aircraft approaches the ship directly from behind at relatively low speed.

Taken on Oct. 14, 2018 the interesting video in this post shows an F-35Bperforming a Shipborne Rolling Vertical Landing (SRVL) method for the first time aboard HMS Queen Elizabeth.

This approach to land allows the jet to carry heavier loads back aboard the warship.

According to Save The Royal Navy, during SRVL the aircraft approaches the ship directly from behind at relatively low speed. A combination of thrust from its nozzle and lift-fan and lift created by air over the wings allows it to land with up to 7000lbs greater all up weight (UAW).

Noteworthy the UK is the only nation currently planning to use SRVL although the U.S. Marine Corps is following developments closely as its aircraft are likely to be frequently embarked aboard the Queen Elizabeth Class carriers. USMC Test pilot, Major Michael Lippert is on board and commented “This is one of the main reasons we are here. It is of interest to the service at large and we are learning from each other. I will have the honour of conducting the first SRVL at sea for the US military so I’m excited. It’s what we all join up for – this is truly experimental test flying.”