Video: Back in November, a Russian Fighter Jet Came Too Close to a U.S. Reconnaissance Plane 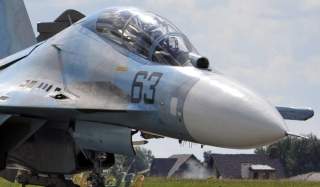 - The Navy aircraft was in international airspace and had its transponder on as the SU-27 made two close passes on Monday, said Pentagon spokesman Eric Pahon.

(This first appeared in November of last year.)

- Monday’s incident was the second such close encounter since January, when another Russian SU-27 came within five feet of a Navy EP-3 and then crossed through the Navy aircraft’s flight path, causing the EP-3 to fly through the Russian fighter’s jet wash.

- The Russian defense ministry denied that one of its fighters flew too close to a Navy EP-3, Nikolay Lakhonin, a spokesman for the Russian embassy in Washington, D.C., told Task & Purpose.

- “In an official statement, the ministry stressed that it had scrambled the jet after radars detected an unknown aerial target approaching the Russian border,” Lakhonin said in an email. “‘The jet’s crew reported identifying the US reconnaissance plane and accompanied it, preventing a violation of Russian airspace and followed all necessary safety procedures,’ the statement said.”