This Video Might Be the Future of Russia's Army: Armed Ground Robots 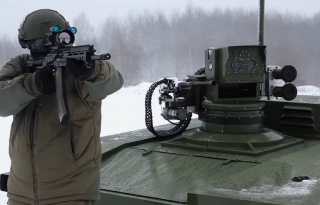 The Russian army is developing tactics for a future force of armed ground robots. And the tactics include human infantry scouting ahead of the main drone formations.

The new tactics point to the Russia's growing determination to field, on the ground and in the air, meaningful numbers of armed robots.

The foundation is using the tracked, tank-size Marker ground robot for these tactical experiments.

"The Marker robot is a platform for exploring other robotics technologies, though official releases said it may also see use with Russian special forces," reporter Kelsey Atherton wrote for C4ISRnet, a trade publication.

"Marker is built to be modular, with open information architecture," Atherton wrote. "One configuration for the testbed arms it with a Kalashnikov-produced machine gun and a part of anti-tank grenade launchers. We can safely expect to see it test a range of weapons."

Marker is the star of a video the Kremlin released online in March 2019. The video depicts robots and soldiers working together on a pretend battlefield. Marker works in "a pair with a [human] fighter, receiving target designation from the sight of his weapon," ARF stated, according to Atherton.

"This is a novel twist on the another form of robotic targeting, where A.I.-powered sensors take aim and the human checks in before firing," Atherton explained. "It turns infantry into spotters for robots."

If the ARF video is any indication, the human spotters also could have help from small, flying drones. "Marker isn’t even the star of its own video," Atherton pointed out. "There’s also a swarm of five quadcopters, joined by two more swarms of five quadcopters each, all supposedly working together as a single 15-member unit."

Together, a mixed crew of human and robot scouts could feed information to the main force of large, tank-like drones.

The tank-drones themselves in their early incarnations remotely would be controlled by human operators. Over time, artificial intelligence would supplant the remote operators until the tank-drones are autonomous, the ARF stated. "The evolution of combat robots is on the path of increasing the ability to perform tasks in autonomous mode with a gradual reduction in the role of the operator."

Autonomous Russian tanks are the kind of threat that the U.S. Army's Cyber Institute imagined when they published a graphic novel depicting a horde of Russian robots overwhelming a small force of manned American tanks. The Cyber Institute is part of the U.S. Military Academy at West Point in New York.

The Marker experiments coincide with increasing interest in, and investment in, autonomous combat systems in Russia. In January and February 2019, the first photos circulated depicting a jet-powered attack drone in taxi tests at an airfield in Novosibirsk in southern Russia.

The Hunter-B drone, while apparently not very stealthy, for Russia nevertheless represents a big step toward autonomous systems. The U.S. Air Force in 2001 first deployed armed unmanned aerial vehicles. Russia has yet to field armed UAVs of its own.

Weighing 20 tons and capable of speeds up to 620 miles per hour, Hunter-B likely will be the "heaviest and fastest UAV [in Russian service] if and when fielded," Samuel Bendett, an expert on Russian weapons, told Atherton. The developers reportedly plan to fly the drone for the first time in 2019.

Taken together, Hunter-B and Marker could signal a serious shift in the Kremlin's approach to drones. After years of relative neglect in Russia, combat robots soon could enter front-line service in meaningful numbers.

Which is not to say the U.S. military isn't also working hard to integrate drones into its ground formations. An armed, robotic M-113 tracked armored vehicle provided covering fire for U.S. Army soldiers during a summer 2017 war game in Michigan.

Soldiers were trying to get through the simulated mines and close enough to an earthen berm to blow it up with explosive charges.

When the soldiers were in position, the drone M-113 maneuvered into a firing position "to provide a screen," Maj. John Dickson, a TARDEC manager, told National Defense, a trade magazine. The M-113 fired live ammunition during the war game.

The test represented a turning point for the U.S. Army. "We’re at the point of heightened expectations and we’re at the trough of disillusionment," Paul Rodgers, director of the Army’s Tank Automotive Research Development and Engineering Center, said of the war game.

Marker's own debut could indicate that Russia, too, is at a turning point when it comes to armed ground robots.