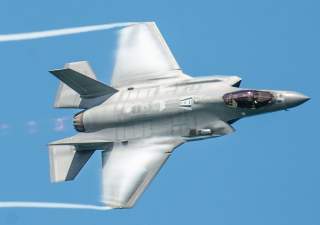 Taken on Aug. 13, 2018 at the Utah Test and Training range, the video (see here) shows 388th Fighter Wing’s 4th Fighter Squadron F-35A aircraft displaying the firepower of GAU-22/A 25mm internal cannon during strafing exercise on two sets of ground targets (while according to the video description the footage of the stationary aircraft at the end of the video is from the very first live fire test of the cannon, June 2015).

As we have already explained 388th FW pilots were the first to fire the F-35A’s GAU-22/A 25 mm cannon in a strafing run during training.

“Now that we’re firing live rounds, we can train based on the function of the gun, the function of the aiming system, aircraft performance and pilot skill. Not just simulate those,” Lt. Col. Yosef Morris, 4th Fighter Squadron commander, and one of the pilots on the first strafing run, said in Micah Garbarino’s article 388th FW dialing-in cannon loading, firing in training.

“There’s a lot of complexity and pilot skill involved in employing any weapon. We’ll be (firing the cannon) on a much more regular basis and rapidly surpass what they did in testing. Our first attempt was very deliberate and controlled so we can take what we learned and use it in our academics,” Morris said.

The F-35A’s internal cannon carries 181, 25-millimeter rounds and can fire at a rate up to 50 rounds per second. Because the gun is internal, the aircraft can remain stealth in enemy airspace where other fighters and attack aircraft could not survive.

“At 25 millimeters, it’s a larger cartridge than most other fighters carry and there are various designs (armor piercing, explosive). … It’s a weapon we can employ visually and very rapidly in all of our mission sets,” said Morris, “On some missions, like close air support, it may be our primary weapon. In others, it’s our last resort. … It’s a crucial capability. ”

One big step for maintainers to deliver the capability to fire the cannon, was validating and training to use a bulk ammunition loader. They also developed emergency and weapons response programs before loading the gun.

“There was close cooperation between maintenance and operations. We tracked the aircraft through the flying day, tracked the rounds expended and solidified our maintenance processes and procedures,” said Capt. Dayna Grant, officer in charge of the 4th AMU. “This milestone allows extensive training for maintainers and pilots alike.”