VIDEO: Watch This Ukrainian Fighter Pulling Off An Insanely-Low Flyby 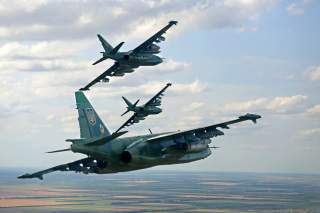 The Ukrainian Air Force seems to be increasingly entertaining itself with breath-taking aerial acrobatics.

Exhibit A came on Friday, when The Aviationist flagged an intense clip of an SU-25 Frogfoot buzzing Ukrainian military personnel on the ground.

The footage emerged days after a California Air National Guard was killed on Tuesday when a Ukrainian SU-27B fighter crashed during the Clear Sky military exercises in western Ukraine, and they underscore a dangerous trend among Ukranian aviators: a penchant for danger-close low-level flybys frequently captured in viral videos.

- In June, another video captured another Su-24MR Fencer conducting another aggressive flyby across the Staro flight line.

- The recent incidents represent an uptick in recorded flybys after a relative lull in activity. In November 2016, footage showed a Su-27 Flanker at an unidentified airbase after breaking right at the end of a runway, climbing directly over the head of an eerily-composed cameraman.

- In November 2015, a Su-25 Frogfoot pulled off a low-level victory aileron roll right above the heads of some female Ukrainian infantry posing for a photograph; the previous September, footage emerged of a massive Ukranian Il-76 cargo plane took a moment to buzz a fleet of parked Su-25s.

- Finally, in April 2014, the Aviationist surfaced one of its earliest Ukranian flyby videos with a MiG-29 pulling a fast one over the city of Slovynask in a show of force to pro-Russian separatists on the ground.