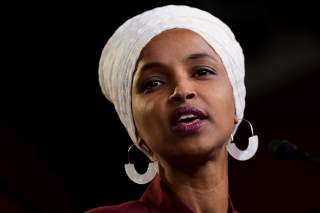 Ilhan Omar, but failed to include most of the reasons for the criticism.

The news agency mentioned briefly only two instances of Omar’s anti-Semitic remarks, referring to one as playing “off tropes questioning the influence of Jewish money in American politics.”

Trump began tweeting Sunday about how the “‘Progressive’ Democrat Congresswomen…should go back and help fix the totally broken and crime infested places from which they came. Then come back and show us how it’s done.”

The tweets were likely aimed at Democratic Reps. Omar, Alexandria Ocasio-Cortez of New York, Ayanna Pressley of Massachusetts and Rashida Tlaib of Michigan.

The article explains how Omar is a refugee from Somalia who has worked her way up to become “the first Somali-American Muslim legislator in U.S. history.” It also stated that Trump “vilified” Omar and three other congresswomen after he tweeted suggesting they “go back” to their home countries.

The article briefly mentions that Omar apologized to some Jewish communities after backlash from both Democrats and Republicans, and that the House of Representatives approved resolutions to “indirectly rebuke Omar.”

VOA’s article avoids giving most of the reasons for Trump’s criticism of Omar, but details the aggressive commentary used by Trump in his attacks against her and other congresswomen.

Omar has made several anti-Semitic and anti-Israel comments, almost all of which were not reported by VOA in the article.

“Israel has hypnotized the world, may Allah awaken the people and help them see the evil doings of Israel,” Omar wrote in a resurfaced tweet from 2012, according to the LA Times.

In February 2019, Omar said the people who supported Israel in Congress were motivated only by money, tweeting “It’s all about the Benjamins, baby!” The tweet was linked to the anti-Semitic idea that Jewish people influence politics through monetary donations, the LA Times reported.

After apologizing, Omar wrote a few weeks later that American politics who support Israel are advocating “allegiance to a foreign country.” She did not apologize for these comments even after the House passed a resolution condemning anti-Semitism.

None of these comments were mentioned or linked to in VOA’s report Thursday.

Omar improperly spent thousands of dollars in campaign funds in 2016 and 2017 while in the state legislature, according to Minnesota’s campaign finance and public disclosure board. She was ordered to personally repay her campaign and had to pay a civil penalty fine on July 4, 2019.

VOA reporter Ken Bredemeier did not mention this in his report Thursday.

Also not mentioned in the report are Omar’s controversial comments about Al-Qaeda.

“Some people did something,” was how Omar cited the Sept. 11 terrorist attacks that killed almost 3,000 people.

“CAIR [Council on American-Islamic Relations] was founded after 9/11 because they recognized that some people did something and that all of us were starting to lose access to our civil liberties,” Omar said according to the LA Times. CAIR was founded in 1994, before the terrorist attacks.

Omar was also recorded giggling as she spoke about Al-Qaeda in an interview. This was not mentioned in VOA’s report.

One of Omar’s marriages has recently attracted attention over allegations of immigration fraud, according to The Star Tribune.

“Once divorced, she is married to Somali-born Ahmed Abdisalan Hirsi, the father of her three children and recently an aide to a Minneapolis City Council member,” Bredemeier wrote.

Recent investigative documents released by a state agency have brought up questions about Omar’s first marriage, according to The Star Tribune. These documents may bring about past questions regarding Omar and if she once married her brother to get around immigration laws, The Star Tribune reported.

No mention of the recent documents are included in VOA’s article.

VOA has been vocal about issues regarding Trump, but has stayed silent on other issues such as the attack of conservative journalist Andy Ngo at an Antifa rally. An editor for VOA was discovered last week to have a Facebook page filled with anti-Trump rhetoric, despite a VOA media policy barring biases on public platforms.

“The article in question was intended to be a profile of an individual who is currently in the news, designed to provide context for VOA’s international audience,” David Jones, VOA’s Deputy Managing Editor, told the Daily Caller News Foundation.

“It was not intended to weigh the pros and cons of President Trump’s recent remarks. The profile dealt in some detail with the controversy over her remarks about Israel. Thank you for your interest in VOA’s coverage.”

The DCNF asked whether the news agency believes that a foreign audience deserves context regarding why Trump’s comments were made. The DCNF also asked if the profile was about Trump and if three paragraphs sufficed for Omar’s Israel remarks.

“The person profiled was Ilhan Omar. Beyond that we stand by our coverage and do not plan to comment any further,” Jones told the DCNF.