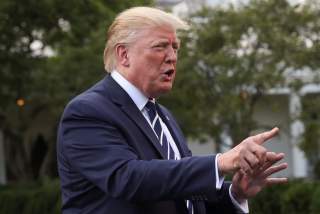 Voice of America (VOA), a government-run news outlet, told the Daily Caller News Foundation the editor who had a Facebook page filled with anti-Trump posts deleted them, but it is unclear if he was punished.

Doug Bernard Johnson, VOA’s Press Freedom editor, had a Facebook page that contained anti-Trump posts. VOA has a social media code that requires VOA employees to be impartial in public spaces and “adhere to a high standard of independence and objectivity.” VOA told the DCNF the posts have been deleted from the account.

“The posts referenced in your initial communication are now removed from the employee’s Facebook accounts,” Bridget Serchak, director of Public Relations at VOA, told the DCNF. “As stated previously, VOA has a social media policy in its Best Practices Guide to which all VOA journalists are expected to adhere.”

The Facebook page changed settings and is now private. The DCNF could not verify that the anti-Trump posts have been deleted, and Serchak would not say whether Johnson had been reprimanded.

“We never discuss individual personnel matters,” she said. “We handle infractions in accordance with VOA policies and federal law.”

VOA has been made aware of the Facebook page and anti-Trump posts multiple times in the past year and ignored the warnings, a former VOA program manager told the DCNF. The news outlet took multiple days to respond with a comment after the DCNF contacted VOA regarding the posts.

The outlet sent an email to staff after the DCNF contacted it about the Facebook page, which the DCNF has obtained.

“Fuck Trump,” one image shared on the Facebook page read.

“When potential policy violations are brought to the attention of VOA management, employees are reminded of the policy and expected to ensure that their social media accounts comply,” Serchak said. “VOA takes very seriously matters of journalistic ethics and neither tolerates nor condones editorial bias by any VOA journalist.”

She said the outlet’s journalists are “expected to maintain the highest professional standards of journalism, as reflected in VOA standards and policies.”

“VOA leadership has and will continue to emphasize to its workforce the importance of adhering to the highest standards of objectivity and impartiality in all professional and personal communications.”

Johnson did not immediately respond to a request for comment.