Waiting for an Undersea Robot in Antarctica to Call Home 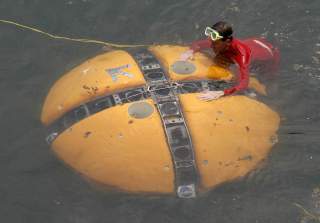 “Call! Just call!” I think loudly in my head. “Did something happen? Are you okay?”

I might seem like a worried parent waiting for a teenager to report in from an unsupervised outing. Rather, I’m a research biologist with the Antarctic Ecosystem Research Division at the National Oceanic and Atmospheric Administration. It’s late February 2019, and I am waiting for an autonomous underwater glider in Antarctica to surface and call me via satellite, so I can give it new diving instructions. The longest it’s supposed to go without surfacing is eight hours, and it’s now been nine.

Did it get stuck under an iceberg? An underwater ledge? I feel so helpless; I’m 9,000 miles away in San Diego and all I can do is chew my fingernails and think, “No. This can’t happen. We can’t lose this glider so close to the end.”

Our research team is two-and-a-half months into a three-month-long mission just north of the Antarctic Peninsula. This is our first time deploying gliders so far from home, and our hope for a successful field season – not to mention a great deal of research – depends on recovering the two gliders our group deployed in December 2018. The gliders are now full of oceanographic data that will help us provide scientific advice on how best to conserve the Antarctic ecosystem as the area around the peninsula warms faster than almost any other region on Earth, which may adversely affect the animals that live there.

For over 30 years, the NOAA group I’m part of has conducted studies to estimate how many Antarctic krill, small shrimp-like creatures that support the diverse Antarctic food web, live around the Antarctic Peninsula.

Krill feeds penguins and seals that breed in this area every summer and whales and fishes that feed here year-round, while also supporting a major fishery. You may have seen bright-red dietary supplements made from krill oil prominently displayed at the pharmacy. Our data help establish catch limits for the krill fishery, ensuring enough krill remain in the ocean to maintain the population after all people and animals take what they need to make a living. Without good data to support fishery-management decisions, krill fishing could undermine the food web for which Antarctica is so well known, as demand for supplements and other krill products surges.

Until three years ago, my program chartered a research vessel for a month each year to sail around the Antarctic Peninsula and estimate the biomass of krill. But after 2016, rising vessel costs eliminated our surveys. For our program to continue, we had to find a creative way to collect our data in Antarctica without actually going to Antarctica.

Our solution was to use autonomous underwater gliders, which can be deployed in just a few hours by a small team from a ship in Antarctica, and then recovered months later. Gliders can dive to 3,000 feet, cover thousands of miles and follow commands from anywhere in the world with a laptop and an internet connection. Their batteries last six months, which means that they can collect much more data for much less money than a bunch of scientists on a research vessel.

The gliders resemble torpedoes in appearance, but contain three massive batteries and an array of scientific sensors that collect much of the same data we used to collect from a ship. Although the gliders are able to transmit small amounts of data via satellite throughout the deployment, the most valuable data are stored on the glider. If we lose a glider, which is always a possibility when you let something roam free in the ocean unattended for months, then we also lose the data.

We had effectively replaced ourselves with drones. But would they work?

For most of our team, the transition just a year ago from annual research voyages to the aquatic versions of C-3PO and R2-D2 was exciting. Secretly, though, I was terrified. I had spent my career as a scientist collecting krill samples from research vessels for biochemical analyses of their tissues. Suddenly I found myself ousted by oceanographic robots full of cables, wires, circuit boards and all sorts of other technological gadgetry.

These are not what you’d call smart robots. A bit like human toddlers, they have some degree of self-awareness, but would destroy themselves without semi-constant monitoring and instructions on how deep to dive or where to go. Outside supervision is especially important in the Southern Ocean, which is full of seamounts, canyons, strong currents and, most importantly, icebergs.

You can’t glider-proof the ocean the way you can baby-proof a house, so I had to forget everything I knew about biochemistry and learn as much as I could about glider piloting in 10 short months.

All that training and practice felt like 10 minutes by the time we finally packed up the gliders and shipped them to the Southern Hemisphere for their first Antarctic deployments. The commands for how deep to dive and where to go seemed simple enough, but the gliders responded as unpredictably as the ocean itself.

A near-disastrous practice deployment in San Diego revealed how slowly they maneuver, particularly in strong currents. Piloting them felt like trying to drive a remote-control semi-truck through a go-kart course, which reinforced our apprehension about driving these things through the ocean all the way across the planet, in one of the most remote and treacherous oceans on Earth.

Never mind the wind and the currents and the icebergs. What made this deployment far scarier was that if things started to go horribly wrong, we had no way to get the gliders back. It was like dropping a toddler off at college on another continent: What if he needs you and you can’t get to him?

Almost exactly 10 months from our first day of glider training, we carried the gliders across the Drake Passage on a research vessel bound for the Antarctic Peninsula. The deployments were flawless, and over the next few days, our confidence began to build. We quickly learned that icebergs were enemy number one, and they were formidable opponents. Satellite images of icebergs were available every couple of days, and we overlaid maps of planned glider tracks onto those images so we could steer the gliders around any ice in their way. The trouble was, even the newest images we received were already a day old, and the ice had already moved.

On this chart of the South Shetland Islands, one intended glider path is marked in straight gray lines. Circled in red in the middle is the iceberg the researchers called ‘Yacu.’ NOAA

Smaller icebergs were usually avoidable, but around three weeks into the deployment, “Yacu” appeared on the scene. Inspired by a mythological South American snake that eats everything in its way, that was the nickname we gave a 12.5-mile-wide iceberg from the Weddell Sea that drifted right into the path of one of the gliders. Yacu stuck around for the rest of the deployment, every few days spawning smaller (but still huge) icebergs that posed a constant and unpredictable threat to gliders already at the mercy of currents, tides and wind.

If a glider gets trapped under an obstacle and senses that it’s been underwater for too long, it drops an emergency weight to rocket itself to the surface for an immediate recovery. Once a glider drops its weight, it can’t dive anymore. So if it is trapped under ice, it’s likely to stay trapped under ice. And one way to know if a glider is trapped is that it stops calling in, because it can connect to satellites only when it’s at the surface.

Ding ding! Ding ding! My laptop screams at me after 16 long hours: The glider is at the surface.

It is well past 9 p.m., but every member of our five-person team has been glued to a computer since early afternoon, and we collectively sigh with relief. We now think the glider probably surfaced after the first eight hours, failed to connect to the satellite and resumed diving, which can occasionally happen. The reason for the gap is unimportant compared to our elation. A couple of weeks later, we successfully recovered both gliders on schedule and completed our first autonomous Antarctic field season.

One key finding is that we can, in fact, replace a vessel-based fishery assessment with a glider-based one in less than a year. With gliders, we can get krill biomass estimates comparable to those we would expect from a ship. That means we can use gliders to continue to provide critical data for managing the krill fishery.

This is a profound accomplishment for us and for NOAA, and it also has far-reaching promise for the future of fisheries research globally. The cost of science keeps going up, and autonomous instruments offer an affordable way to collect critical data for effectively managing ocean resources and conserving fragile marine ecosystems worldwide.