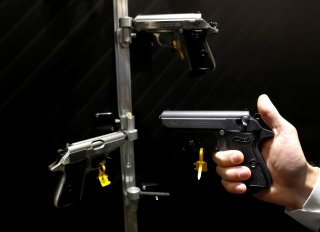 Did somebody just say “James Bond”? The Walther PPK is obviously iconic. Gun enthusiasts and non-gun owners alike are familiar with this little pistol. It has been featured in plenty of media, namely the Bond movies and the excellent video game GoldenEye 007. Naturally, it was on my ever-growing list of guns that I wanted to buy. I did approach this with trepidation though. The 9-millimeter Kurz .380 variant received a couple of less than favorable reviews, but the .22 caliber was good to go, so I picked that up.

Everyone knows the PPK series is downright gorgeous. It has that old-school charm about it. The PPK/s features a full steel frame which means it’s pretty heavy for a pistol. I didn’t mind that though since I bought it as a range toy. One thing I wasn’t fond of was the magazine release. It is placed in a weird spot high up on the frame. It doesn’t ruin the whole experience or anything, but it’s worth mentioning.

This thing is a blast to shoot. The fun is mostly fueled by childhood nostalgia and the innate “funness” of .22 LR. Like you’d expect with any .22 firearm, the recoil is basically non-existent. Muzzle rise is barely noticeable which makes putting rounds on target a breeze. Plus, the accuracy on the PPK/s is fantastic, although I’m not a huge fan of the iron sights. They sit a little bit low and you can’t swap them out or adjust them since they are integrated into the slide. That issue aside, it’s a fun gun and has become one of my favorites to show off to my friends.

I don’t really have much of use for the PPK/s though. I’m highly opposed to carrying .22 gun for self-defense and have plenty of other more modern guns for varmint shooting. That said, this is the perfect gun for a fun time at the range, even if it does just sit in my safe most of the time.

Reliability is a little dicey for a lot of .22 caliber guns, but the PPK ran well for the most part. I ran Cascade Cartridge Inc. ammunition almost the entire time and the PPK ate all that up with no problem. Some of my bottom-of-the-barrel stuff created a malfunction a couple of times, but I don’t really hold that against the gun too much.

What I do hold against the gun is the double-action trigger. The single-action is fine, but good God that double-action is heavy, especially for a .22 caliber gun. Luckily, I’m almost never shooting it with the hammer forward because why would I do that?

The PPK/s really hit me in the childhood nostalgia bone and was everything I hoped for. It is not a practical gun but I didn’t buy it to be practical. I bought it because I wanted something fun, and the Walther PPK/s has that in spades.