Wanna Buy an Aircraft Carrier? Brazil Has One For Sale Right Now. 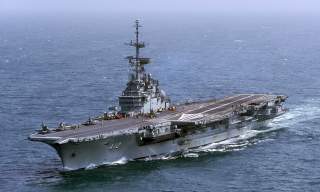