War Is Coming?: America May yet Get into an Escalation with Iran 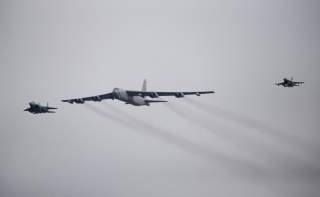 Future flashpoints between Iran and the United States are highly likely.

For now, it appears that the United States will hold off on striking Iran in retaliation for the downing of a U.S. drone by an Islamic Revolutionary Guard Corps (IRGC) surface-to-air missile. U.S. President Donald Trump announced June 21 that he had initially authorized a military strike on three Iranian targets, but called it off 10 minutes before it was due to because he was concerned about the potential loss of life. Iran has avoided a U.S. counterstrike for now, and will almost certainly continue its aggressive regional strategy — which means Trump is at risk of finding himself in a similar position again.

It has become abundantly obvious that Iran has reassessed its strategy toward the United States in the last six weeks. After months of restraint in the face of the U.S. pressure campaign and withdrawal from the Joint Comprehensive Plan of Action (JCPOA), Iran recently embarked on an aggressive course of action that has included striking tankers in the Gulf of Oman twice, attempting to shoot down U.S. drones twice — and succeeding once — and reducing its nuclear-related commitments under the JCPOA. Tehran's efforts to push back against the U.S. campaign have so far brought only a muted U.S. response.

In lieu of a physical response, the United States has promised even more sanctions against Iran and reinforced its intent to deploy more military assets in the region. After the second attack on tankers on June 13, Trump noted that neither tanker was a U.S. vessel and suggested that a red line for the United States would be targeting U.S. interests (military or commercial). With the red line crossed, the U.S. seems to be moving it, now perhaps only being willing to respond if Iran hits its commercial interests or injures or kills U.S. citizens.

Trump's efforts to reduce the risk of U.S. entanglement in another Middle Eastern conflict just months before the 2020 presidential elections comes as no surprise. But it does present the risk of giving Tehran the impression that the Trump administration is apt to decline to respond to future provocations. And this means Iran is likely to maintain its newly aggressive posture, whether in the Persian Gulf, the Gulf of Oman or another theater, all while resuming certain nuclear activities. It might ultimately take a U.S. military strike on Iran to definitively establish red lines that Iran is loath to cross — but such a U.S. strike could, of course, cascade into the sort of conflict Trump doesn't want.

Future flashpoints between Iran and the United States are highly likely. The next, over Iran's nuclear program, could manifest in a matter of weeks. On June 17, Iran announced that it would start exceeding the JCPOA limit for its stockpiles of low-enriched uranium and heavy water in 10 days, though this comes in response to the U.S. revocation of waivers allowing Iran to export its excess production. Iranian Foreign Minister Javad Zarif reiterated that phase two of Iran's reduction of its nuclear commitments would begin on July 7, which could entail Iran upping its level of uranium enrichment to 5 or 20 percent.

In the meantime, the United States will continue to seek foreign partners dependent on Middle Eastern oil and gas to help share the burden of protecting commercial shipping through the vital Strait of Hormuz. It will also try to seek opening dialogue with Tehran — something Iran has rejected unless the United States relaxes sanctions pressure first. So while the United States has refrained thus far from striking Iran and risking retaliation, the risk of a U.S. counterstrike will remain acute over the third quarter.

Iran, U.S.: The Lack of a U.S. Military Response to Iran Does Not Signal All Clear is republished with the permission of Stratfor Worldview, a geopolitical intelligence and advisory firm.