A War in Europe? Why Putin’s Russia Is Escalating in Ukraine 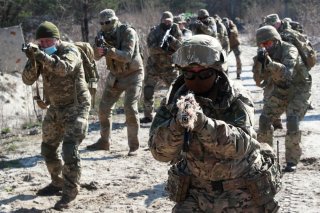 Vladimir Putin’s decisions in favor of Russia’s military territorial expansion were as rational, in terms of domestic and foreign power politics, in Georgia in 2008 as they were in Ukraine in 2014. A third such decision in the coming weeks or months would be equally so. In 2008, no sanctions by the West followed the de facto Russian occupation of South Ossetia and Abkhazia. The European Union’s only relevant sanctions package related to the Ukraine conflict was adopted less than two weeks after Russia had shot down a Malaysian passenger plane over eastern Ukraine on July 17, 2014. The sanctions that the EU adopted as a result, which remain in place to his date, and that have had a moderate impact on Russia’s economy, were not so much a reaction to the Russian invasion of Ukraine. Rather, they represented Brussels’s punishment of Moscow for the deaths of over 200 EU citizens who had been on the MH17 flight. Truly painful EU sanctions in response to Moscow’s adventures in the post-Soviet space—such is the lesson of Russia’s various wars in Eastern Europe and the Caucasus over the past thirty years—have never been and probably never will be adopted.

For Russia in 2008 and 2014, the economic costs of its violent escalations in Georgia and Ukraine were low, and, for the Putin regime, the short-term domestic political gains were high. Therefore, to refrain from military interventions in South Ossetia as well as Abkhazia in 2008, and in Crimea as well as the Donets Basin in 2014 would have been sins of omission. They boosted Putin’s popularity and his regime’s stability, at least in the short term.

The popularity of the Russian ruling elite has been declining for several months now. This is due, above all, to the far-reaching humanitarian, social, and economic consequences of the Coronavirus crisis, which are glossed over in Russia’s official statistics. Among Putin’s various current political problems, the best known is Alexei Navalny’s gradual transformation into a martyr. As a result of these and some other concurrent challenges, the stakes for Putin and his followers have risen significantly since 2020.

Against this backdrop, and in the run-up to the upcoming State Duma elections in September 2021, the relative domestic political gains of another foreign policy adventure have also increased. The current tensions between Russia and the West and Ukraine are thus likely to continue or intensify—at least, until the Russian parliamentary elections in September. In a worst-case scenario, the currently simmering conflict between Russia and Ukraine could turn into an open and full-scale interstate war.

In contrast to the first active phase of the war in 2014-2015, Ukraine today has a serious army that is relatively large and experienced in combat compared with other armies in Europe. However, a Russian war against Ukraine that is no longer covert—as it has been until now—would give the Kremlin a freer hand in using a variety of destructive weapons systems. Until now, Moscow has largely relied on the highly armed but comparatively unmodern irregular combat units of its two satellite or pseudo-states, the so-called “Donetsk” and “Lugansk People’s Republics,” in the Donets Basin. Russia has also occasionally taken artillery fire on Ukraine from Russian soil. In exceptional cases, Moscow has deployed regular Russian Army mobile infantry units to Ukraine.

However, if Russia were now to conduct a traditional and not merely proxy war against Ukraine, the Kremlin may decide to use the Russian Air Force and possibly even ground-ground rocket systems against Ukraine. To be sure, Moscow would most likely not use weapons of mass destruction in Ukraine. However, even a Russian deployment of bombers, heavy artillery, and short-range missiles with conventional warheads in Ukraine could have enormous, even catastrophic, consequences.

A new territorial expansion by Russia into Ukraine could, among others, mean the military conquest of the North Crimean Canal in southern mainland Ukraine to ensure the supply of freshwater to Crimea from the Ukrainian Dnipro River. Such an increase in international tension, as well as new Russian territorial gains in southern Ukraine, could be attractive to the Kremlin in terms of its electoral tactics and power strategy. An incursion and possible military triumph by Russia in southern mainland Ukraine, justified by humanitarian arguments, would be more suitable as a campaign issue for Putin’s ruling party than a protracted effort, by now delayed and domestically unprofitable construction of desalination plants to supply Crimea with freshwater derived from the Black Sea.

Even if the Kremlin ultimately decides against a major war in Ukraine, the next few months are likely to remain tense. Ukraine will—so it looks at present—in any case, emerge from the current escalation with more or less heavy losses. The EU will presumably, as before, rearm rhetorically, but remain passive in its foreign economic policy practice as long as there is no additional Russian mass killing of EU citizens. It will, therefore, largely depend on the United States and the United Kingdom how far Putin will go in Ukraine.

Dr. Andreas Umland is a Research Fellow at the Swedish Institute of International Affairs in Stockholm and Senior Expert at the Ukrainian Institute for the Future in Kyiv.