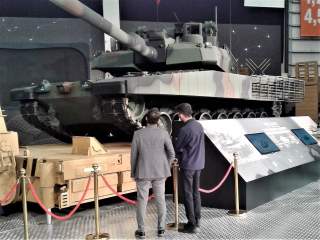 As if the Near and Middle East needed more ballistic missiles, now Turkey has fired one in combat.

Turkey fired a Bora – a ballistic missile based on a Chinese design – at Kurdish militants in northern Iraq.

“Turkey’s domestically-produced tactical ballistic missile BORA successfully struck its target after it was used for the first time in actual combat within the scope of Operation Claw in northern Iraq,” according to Turkey’s Yeni Safak news site. “Bora was developed by Turkish defense giant ROKETSAN; its export version is called Khan.”

Yeni Safak displayed a video of a Bora being fired. The target was reportedly in the Hakurk region of northern Iraq, which Turkish ground and air forces hit in an operation against bases belonging to the Kurdistan Workers Party (PKK), an independence movement that fought against Turkey for decades. There was no word on whether the missile inflicted any damage on its target.

The Bora is a mobile, solid-fueled missile based on China’s B-611 short-range ballistic missile, brought to Turkey as part of Sino-Turkish defense ties that have resulted in several pieces of Chinese weaponry migrating west to Ankara. Turkish media suggests that Turkish engineers have managed to improve the original Chinese design.

“Turkey’s new missile has a range of 280 kilometers [174 miles] and has GPS / INS guidance,” according to a Turkish defense expert writing in the pro-government Anadolu Agency news organization. “Whereas the Chinese B-611 has a CEP (circular error probable) of some 50 meters [164 feet], open-source evidence suggests that ROKETSAN has managed to reduce it to some 10 meters [33 feet] for Bora, making the missile more accurate. The missile can carry a conventional warhead with a 450-kilogram [992 pound] payload.”

“Considering the MTCR (missile technology control regime) restrictions, and given the fact that Turkey also seeks to export Bora, current specifications of the missile depict it as a reliable, combat-tested tactical asset,” says Anadolu Agency.

Perhaps, though it is hard to know how successful the missile strike was without independent confirmation of its effectiveness. But what’s interesting is how Turkey sees ballistic missiles as a must-have weapon in a region awash with missiles and regimes that aren’t friendly to Ankara. “Turkey’s Middle Eastern doorstep has long been plagued by an arms race for ballistic missiles and weapons of mass destruction,” Anadolu Agency explains. “Syria and Iran are formidable missile proliferators in this respect.”

Turkey took advantage of the Syrian Civil War to occupy parts of northern Syria. Turkish troops and Turkish-supported Syrian rebels have created a buffer zone to keep Turkey’s implacable enemy – the Kurdish rebels – at bay. This has resulted in clashes with Syrian government forces. The Syrian government has a huge arsenal of Soviet-supplied Scud missiles, as well as North Korean and Iranian ballistic missiles. Missile-rich Iran has criticized NATO missile defense radars stationed in Turkey.

The Andalou Agency article also refers to Turkey being “surrounded by missile contingents across Crimea and Armenia.” Which suggests that while relations between Turkey and Russia have warmed, Ankara is still mindful of the colossus on its northern frontier, as well as Armenia and its Russian-supplied Iskander missiles.

To add some hot sauce to an already volatile region, Greek media is reporting that Greece is within range of the Bora. This raises the prospect of an Aegean arms race if Greece feels compelled to acquire new weapons against its traditional rival Turkey.