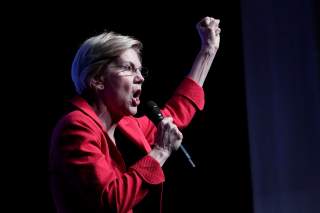 Sen. Elizabeth Warren of Massachusetts defended a major real estate company in the 1990s as activists urged the company to clean up toxic waste, The Washington Post reported, citing an over 20-year-old memo.

Warren wrote a memo in 1996 arguing that businesses faced the “risk of the unknown” from a growing threat of lawsuits waged against them from activists hoping to sue them into oblivion, the Monday report notes. The memo contrasts with the Democrat’s campaign against corporate greed.

“Environmental claims, product liability claims, and mass tort claims, for which we have currently only seen the tip of the iceberg, are multiplying against American businesses,” Warren wrote at the time. The eight-page memo was written on Harvard Law School letterhead.

Warren became one of the highest paid professors at Harvard in 1996, media reports show.

She was arguing that a different company should take responsible for the cleanup, Warren’s campaign told reporters.

Warren was paid about $2 million as a legal consultant during her time at Harvard, according to a summary her presidential campaign released Sunday. The senator announced in February her intention to run for president as a progressive Democrat railing against big business.

The memo highlights Warren’s work representing a real estate company called CMC Heartland in 1996 that was fighting in court to avoid paying to clean up a polluted old rail yard in Washington. She was paid about $21,000 for the work, Warren’s campaign said Sunday.

CMC Heartland Partners was working to evade a state law requiring it to pay for about $4 million of the cleanup costs, WaPo reported. The company argued at the time that it should be shielded from the law because it acquired the land through a bankruptcy acquisition.

The company used the memo as an attempt to elevate the matter to the U.S. Supreme Court. Activists decry this tactic.

“How many lives were changed while they had that fight? How many women weren’t able to carry their baby full term or had a birth defect or had a child that got cancer?” Lois Gibbs, who founded the nonprofit group Center for Health, Environment and Justice, told reporters.

“There was no question the rail yard would get cleaned up; the question was which company would pay,” Warren’s spokeswoman, Kristen Orthman, told reporters. “Elizabeth’s memo was not about the merits of environmental laws, which she strongly supports and has fought to expand both in the Senate and as a presidential candidate.”

Warren has staked much of her presidential ambitions on targeting companies like ExxonMobil. She announced a plan in November includes holding massive oil producers responsible for climate change.

“[I]f bad actors like Exxon break the rules and deliberately lie to government agencies, my plan will treat them the same way the law treats someone who lies in court – by subjecting them to potential prosecution for perjury,” Warren wrote in a plan in November.