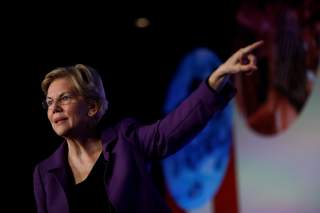 Presidential candidate Sen. Elizabeth Warren is floating the possibility that Facebook and President Donald Trump are brainstorming ways to subvert the will of voters ahead of the 2020 election.

Warren elevated her squabble with Facebook CEO Mark Zuckerberg in a Twitter thread Monday night, telling her followers that the Silicon Valley company and Trump are cavorting. The Massachusetts senator is also using her beef with Zuckerberg as a rallying cry.

“Facebook has incredible power to affect elections and our national debate. Mark Zuckerberg is telling employees that he views a Warren administration as an ‘existential’ threat to Facebook,” Warren wrote. “The public deserves to know how Facebook intends to use their influence in this election.”

She goes on to suggest that the president and Zuckerberg are in cahoots. “Trump and Zuckerberg met at the White House two weeks ago. What did they talk about?” Warren asked rhetorically.

She was referring to reports showing that Trump and Zuckerberg met on Sept. 20 at the Oval Office. The president believes Facebook and other big tech companies are discriminating against conservatives online.

Warren’s campaign has not yet provided a statement to the Daily Caller News Foundation elaborating on her tweets.

Relations between Zuckerberg and Warren have been icy ever since the Democrat proposed a plan in March to break up tech companies with $25 billion or more in annual ad revenue. The idea is a potential death knell for Facebook, which relies heavily on ad revenue for their existence.