Warren: My Plan Will 'Take Power Away from the Wealthy' 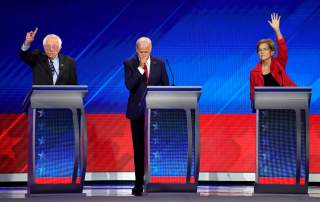 2020 presidential candidate Elizabeth Warren boasted of the “biggest anti-corruption plan since Watergate” ahead of a speech she is to deliver in New York City.

As the Massachusetts senator is expected to speak about corruption in Washington Square Park Monday night in New York City, Warren’s Senate office said she will be introducing an updated version of the ‘Anti-Corruption and Public Integrity Act,’ a bill “attempting to improve the anti-corruption and public integrity laws.”

“Today, I’m announcing a comprehensive set of far-reaching and aggressive proposals to root out corruption in Washington,” Warren wrote in a post to Medium.

“It’s the most sweeping set of anti-corruption reforms since Watergate,” she added. “The goal of these measures is straightforward: to take power away from the wealthy and the well-connected in Washington and put it back where it belongs — in the hands of the people.”

The plan also includes repeated references bashing President Donald Trump as an example of how Trump’s administration only benefits the wealthy.

“Our government works for the rich and powerful,” Warren says in a video shared on Twitter as the camera pans over a picture of President Trump.

Tomorrow, September 16th, I’ll be in New York City to tell the story of how working women organized to change the course of history after the Triangle Shirtwaist Factory fire. I hope to see you there: https://t.co/tVK8xMeNon #WarrenNYC pic.twitter.com/ShC9TC75i7

“Make no mistake about it: The Trump Administration is the most corrupt administration of our lifetimes,” she added in Medium post. “That’s why I’ve released plans to fight Washington corruption.”

Warren’s speech will take place at the location of the Triangle Shirtwaist factory fire that killed 146 people in 1911 due to unsafe working conditions. Most of those killed were female immigrants, and the tragedy ultimately led to strong labor reforms.

“The fire exposed corruption but these workers didn’t stand on the sidelines,” Warren says in her video released on Twitter. “They fought back…Big structural change: brought to you by women.”

Warren has previously criticized former President Barack Obama for his approach to rooting out corruption, particularly Obama’s comment, “The system isn’t as rigged as we think.”

“No President Obama, the system is as rigged as we think,” Warren wrote in her 2017 book This Fight is Our Fight, according to Politico. “In fact, it’s worse than most Americans realize.”