A Warrior and a Scholar: This Israeli College Student Shot down a MiG with His F-4's Gun 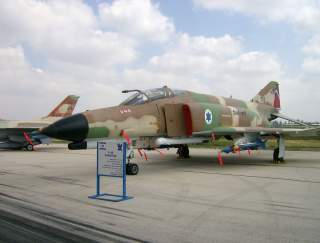 While Aviem Sella continued his studies,the IAF purchased the Kurnass and 69 Squadron was reactivated: the result of this event was that Sella flew during the Attrition War while attending his academic lessons.

The incredible story of the first gun kill scored by an Israeli Phantom.

Acquired by Israel in 1969 the McDonnell Douglas F-4E Phantom II quickly became the backbone of the Israeli Air Force (IAF)thanks to its range, payload and bombing accuracy, .

The second IAF unit to receive the Kurnass (as the Phantom was called by the Israeli Air Force) was the 69 Squadron Hammers that widely used its F-4s for the first time in combatduring the so called Operation Blossom, a series of missions that targeted headquarters, logistic centers and training facilities all over Egypt, with the aim to persuade the country to abandon the Attrition War policy.

It was during one of these missions that the 69 Squadron gained its first ever air-to-air kill, when on Feb. 8 1970, after a strike against a logistic facility at Helwan, a pair of MiG-21s took off to pursue a pair of Kurnass flown by Avihu Ben-Nun with Achikar Eyal and Aviem Sella with Shabtai Ben-Shoa.

The story of how Aviem Sella came to find himself in the right place and at the right moment to shoot down the first enemy fighter in the Hammers history, is very interesting. A story that, as recalled by Sella himself in Shlomo Aloni & Zvi Avidror book Hammers Israel’s Long-Range Heavy Bomber Arm: The Story of 69 Squadron, begins before the IAF Phantom purchase: “Circa 1968 I was planned for conversion to the Mirage, but I already realized that flying was not enough. I initiated academic studies in the Hebrew University, Jerusalem, immediately after the Six Day War. The Mirage conversion course was at Ramat David, and the implication was that I would have had to discontinue my studies, so I turned down this offer. A fighter pilot turning down an offer for Mirage conversion was an unheard of event, and I was summoned by the IAF Commander. The general attitude at the time was that a pilot did not need to study any further than he did during his flying training. I insisted upon studying, renounced the opportunity to fly the Mirage, and for this reason I was later assigned to 69 Squadron.”

While Aviem Sella continued his studies,the IAF purchased the Kurnass and 69 Squadron was reactivated: the result of this event was that Sella flew during the Attrition War while attending his academic lessons. Actually serving as Deputy Commander, three or four times a week he returned from missions over Egypt flying at low altitude over Haifa to inform his lecturers that he would have soon attended their lessons. Then he landed at Ramat David, and an hour later he was sitting in the class at Haifa.

Sella attended his first Kurnass conversion course at Hatzor and then he was assigned to 69 Squadron and he flew his first Kurnass mission on Dec. 25, 1969, when, with slightly more than 30 flying hours on the Kurnass under his belt, he attacked a SAM battery.

He had only 20 more hours on the type when he splashed down the first MiG in 69 Squadron history: “In February 1970 I shot down my first MiG. I am not sure if I practiced air to air gunnery prior to that combat. I launched the first AAM – the wrong missile, as I confused the switches; instead of launching a heat seeking missile I launched a semi-active radar homing missile. I launched the second missile beyond the effective range. I had only flown some 50 flying hours in the Kurnass until then and I hardly knew the cockpit, but luckily for me the Egyptian pilot had plenty of patience for me to do all possible errors until I shot him down.” In fact the Egyptian pilot flew slowly over the Nile Delta, and Sella got into cannon range and managed to shoot him down during his seventh cannon burst.

He completed his air-to-air training during that sortie, and he certainly made history: in fact he scored the first ever gun kill for an Israeli F-4 as well as the first air-to-air kill in 69 Squadron history.

Moreover once the Attrition War ended, Sella finally got nine months of leave to finish his studies.