Warriors Wanted: How the US Army Is Rebooting Its Image 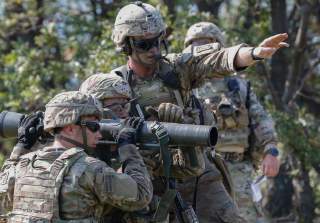 One of the easiest ways to see that is the #InOurBoots campaign — a 100% digital and social campaign that uses virtual reality to put potential recruits in the (virtual) boots of a real soldier.

The Army has been taking "new year, new me" to the next level.

There seems to be a massive rebrand underway; In addition to the Army bringing back it's snazzy-as-all Army Greens, they're developing new commercials and a new GoArmy website, according to Col. John Oliver, the Army Marketing & Research Group's deputy director.

Different from say, the Marine Corps, the Army's advertising campaigns haven't been as consistent in the messaging.

All of this has to be done in a way that speaks to the Army's three core target groups: Potential soldiers, influencers, and the internal Army. The problem is, those three groups all want to see something different.

In previous advertising campaigns, the Army focused on the different career paths in the Army, honing in on the STEM field, and even advertising the bonuses available to soldiers. This tested well with influencers and potential soldiers, but current soldiers weren't interested.

But senior leaders said they wanted fewer "guys in lab coats," and a little more action, Oliver told Task & Purpose. Then came the current Warriors Wanted campaign — fast-paced, combat-heavy commercials that Oliver said tested really well with the internal Army, though they were "turning moms off a little bit."

Now, senior leaders say they want to go back to advertising the other non-combat jobs the Army has to offer.

Army Maj. Gen. Frank Muth, head of Army Recruiting Command, told Task & Purpose in May during an event in New Hampshire that the Army is undergoing "a renaissance," and "coming out of the industrial age of recruiting into the digital age."

One of the easiest ways to see that is the #InOurBoots campaign — a 100% digital and social campaign that uses virtual reality to put potential recruits in the (virtual) boots of a real soldier.

Task & Purpose got the chance to test out some VR goggles that dropped me into the boots of 2nd Lt. Charlotte Levine, a platoon leader and one of the first female tank commanders in the U.S. Army. When wearing the headset, it's like you're standing in her M1 Abrams tank — you can look to your right and left, and see two other tanks firing.

Eventually, the goal is to have a VR experience for every career track in the Army, Oliver said, so recruits can get a better idea of what it would be like to be in the job they want.

Recently, the Army has switched over to a new marketing firm, DDB Chicago, which Oliver says is "full of energy" and packed with ideas on how to develop the Army's image. And while he couldn't disclose everything DDB was working on — "we want some things to remain a surprise" — they're looking at capitalizing on pop culture phenomenons, like superhero movies."It's something that we think will resonate, because these are things that are really popular," Oliver said. "The Avengers: Endgame was like, second most-valuable movie ever, right? So if we can capitalize on things that are already going on in America, and become a part of that conversation, then maybe the message will resonate a little bit more."

There will also be a complete overhaul of the Go Army website in the next year — think Amazon suggestions, but for the Army. Oliver said they want to have an algorithm that picks up the kinds of things you're interested in, and displays them on GoArmy.com.

For example, if you've been googling for financial aid and scholarships for college, the ideal GoArmy.com home page would display financial assistance available to a potential recruit.

In the short-term, DDB is going to be evolving the Warriors Wanted campaign, and growing it to show things like off-duty time, family life, and other aspects of the military. Oliver said there will be a new campaign out later next year.

In May, then-Army Under Secretary Ryan McCarthy told Task & Purpose that the challenge with marketing for the service is that soldiers do so many different things, it's difficult to capture everything in such a short few minutes.

"In the deepest peril in the history of our country, the Army stepped up and dealt with all those challenges. So to serve in the institution, you are the last defenders of everything we hold dear," McCarthy said. "There's a variety of options and things that can be done because there's really not much that isn't asked of us."