This Warship Was Built in 1904. It Became the First Guided Missile Battleship. 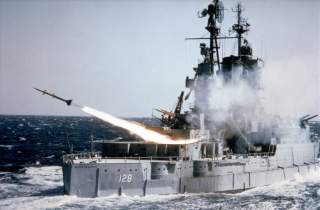 Key Point: The world’s first guided-missile battleship could trace its origins, oddly enough, to a failed Congressional attempt to limit the size and cost of battleships.

In 1904, the United States laid down USS Mississippi (BB-23), second of her name and the first of a class of two pre-dreadnoughts intended to stem the growth in naval construction costs. Congress, embittered by the cost of the six Connecticut-class battleships, limited the Mississippi’s to 13,000 tons, three thousand tons smaller than their predecessors. This resulted in a lighter secondary armament, lower speed, and shorter range, characteristics which only enhanced their obsolescence when HMS Dreadnought entered service before they could be completed. The USN sought to discard these unusable ships as quickly as possible (they could not even operate with the pre-dreadnought squadrons that then constituted the Atlantic Fleet), and in 1914 succeeded in selling both to Greece. German dive bombers would sink both ships in the spring of 1941.

This article first appeared in August. It is being republished due to reader interest.