Warspite: How a British Nuclear Submarine Smashed Into a Russian Missile Sub 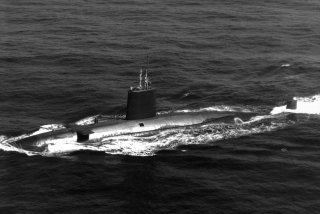 Seven British warships have carried the name Warspite, the most illustrious being the Queen Elizabeth class battleship that fought gallantly in two world wars. During the Cold War, the Royal Navy’s third nuclear attack submarine took the name. Although her service was not as widely known as that of her immediate predecessor, she helped the Royal Navy wage the Cold War against its Soviet counterpart. On a cold day in October 1968, however, Warspite was nearly lost after colliding with a Soviet submarine on a reconnaissance mission.

Warspite was the third nuclear attack submarine constructed by the Royal Navy, following her sister HMS Valiant and the earlier HMS Dreadnought. She displaced some 4900 tons submerged and could make 28 knots. Warspite carried six torpedo tubes and twenty-four torpedoes in her early career, although cruise missiles would later supplement these. Warspite and her kin represented one of the most important contributions that the Royal Navy could make to the security of NATO, patrolling for Russian submarines and developing intelligence on the Soviet fleet.

As detailed by Iain Ballantyne in his book Undersea Warriors, in the fall of 1968 HMS Warspite undertook a routine reconnaissance mission in the Barents Sea. Warspite’s mission was to infiltrate the patrol areas of Soviet submarines in the area, track those submarines, and develop a sonar signature that could be used to distinguish between different boats in the future. The Royal Navy and the US Navy had regularly undertaken such missions since the beginning of the Cold War, but the development of nuclear-powered submarines had increased both the stakes and the opportunities.

Warspite found a Soviet submarine and began to track her, quickly identifying the boat as an Echo II nuclear cruise missile submarine (SSGN). The Project 675 submarine boat displaced 5900 tons submerged and carried eight P-6 cruise missiles in addition to six torpedo tubes. The older, smaller cousins of the 675 boats, the 659s, carried six nuclear-tipped cruise missiles intended for strategic attacks against NATO. By the mid-1960s, however, the Soviet had developed submarine-launched ballistic missiles, eliminating the need for the cruise missiles, and radar-homing that enabled the use of cruise missiles in an anti-ship role. The Echo IIs could make 22 knots submerged, although they were regarded as noisy boats.

The expression “clearing the baffles” has, courtesy of the film Hunt for Red October, spread well beyond the submariner community. Because of the relative noisiness of their own boats and the tendency of NATO subs to slink in behind and track them from an advantageous position, Soviet sub-commanders would often take surprising turns to try to catch any pursuers.

In this case, however, the Echo was not turning. Rather, for some reason it had decided to shut down one of its screws, slowing the boat and fooling operators aboard Warspite into thinking that the Echo was turning. To be clear, there is no indication that the Soviet boat had any idea that Warspite was in the area and probably slowed for its own reasons. But the result of the misunderstanding meant that Warspite was plowing headlong into water that it thought would be empty, but that was in fact filled with a Soviet submarine.

The ensuing crash severely damaged both boats. Warspite’s fin struck the Echo twice, sending her into a heavy list. Men and equipment were thrown around the boat, causing several injuries. A struggle for survival ensued upon Warspite. The helmsman, who had been steering during the collision, froze at his position. The heavy list threatened to trigger automatic protocols that would shut down Warspite’s reactor, ensuring a drop to the ocean floor. The crew had no idea of the extent of the damage and feared that fatal flooding could result from any response. The Echo immediately began to surface, followed quickly by Warspite.

Warspite and the Soviet boat eyed one another warily, but it was apparent that neither was in danger of sinking immediately. Warspite even prepared to signal the Echo that she was prepared to offer medical assistance, but an intercepted transmission indicated that the Soviets had already informed their headquarters and that they had suffered no serious casualties. The skipper of Warspite decided that he needed to look after his own ship instead. Warspite still needed to worry about the Soviets.  Although the incident occurred in international waters, the Soviets didn’t tend to have a sense of humor about NATO submarines operating in their backyard. Moreover, Warspite was not in contact with any NATO vessels at the time. The Soviets could blame the destruction of the submarine on the very real accident, meaning that Warspite was potentially in peril even during peacetime. And if the boat was too damaged to proceed, the threat of internment loomed.

Warspite dived and limped home, hoping to evade any Soviet subs or surface ships along the way. Her speed was limited by the damage, and in any case she needed to be cautious because of the crew’s inability to assess the hurt that the collision had inflicted. It soon became apparent that the Soviets were very interested in finding her, as flocks of ships, submarines, and aircraft began to blanket the area. After getting a sufficient distance away, Warspite again surfaced and made for Great Britain. In order to avoid scrutiny, Warspite diverted to a rarely used island base where some of her damage was repaired, and the rest disguised. An entirely new fin, constructed for use in one of Warspite’s half-sisters, was repurposed and mounted upon the damaged sub. The official explanation of her damage was that the submarine had struck a submerged iceberg while on patrol.

HMS Warspite rapidly returned to service after her refit and went on to serve for another twenty-three years, although a serious fire almost destroyed the boat in 1976. Her half-sister, HMS Conqueror, sank the Argentinean cruiser General Belgrano during the Falklands War. Retired in 1991, the hulk of Warspite still awaits disposal and dismantling at Plymouth. For more stories of Cold War submarine adventures, I highly recommend Ballantyne’s Undersea Warriors.