Was Andrew Yang's Sweepstakes Even Legal? 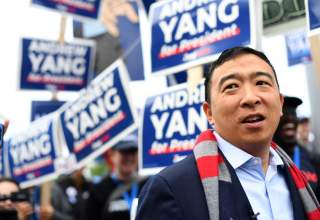 Democratic presidential candidate Andrew Yang offered to give away $120,000 in campaign funds to 10 people at Thursday night’s debate, prompting questions as to the legality of the sweepstakes.

“My campaign will now give a freedom dividend of $1,000 a month for an entire year to 10 American families — someone watching this at home right now,” Yang announced during his opening statement. “If you believe that you can solve your own problems better than any politician, go to Yang2020.com and tell us how $1,000 a month will help you do just that.”

Yang has previously given so-called “freedom dividends” to three families from his own pocket since launching his campaign, The New York Times reported.  But Yang’s most recent offer will be funded by his campaign.

Campaign finance law prohibits candidates from paying people in return for their votes and from using their campaign funds to pay for non-campaign related expenses, The Times noted.

Yang’s campaign told The Times that it was confident the arrangement operates within the bounds of campaign finance laws, noting that that the sweepstakes is designed to educate the public about the Democrat’s signature policy and wouldn’t exist in the absence of his campaign for president.

Yang’s campaign said it “consulted with [its] counsel, and the Freedom Dividends are fully compliant with all [Federal Election Commission] regulations,” CNBC reported.

But the unprecedented nature of Yang’s offer to give away campaign cash is likely to invite scrutiny, experts told The Times.

“Andrew Yang’s use of campaign funds to give ‘freedom dividends’ to supporters would push the boundaries of, and perhaps break, campaign finance law,” said a vice president of the government accountability watchdog Common Cause, Paul Seamus Ryan. “This unprecedented use of campaign funds would give rise to a bunch of novel legal questions.”

Adam Noti, a former associate general counsel of the Federal Election Commission, added: “Campaign donors give their hard-earned money to fund campaign activities, and the law makes clear that paying personal expenses is not a campaign activity … When donors give, they have a reasonable expectation that their money will be used on a campaign and not on somebody’s car payment.”

Yang brushed aside questions surrounding the legality of his campaign’s sweepstakes Thursday evening, tweeting: “Sometimes you have to do something unprecedented to be presidential.”

Sometimes you need to do something unprecedented to be presidential. Glad to have your support, @alexisohanian! #DemDebate pic.twitter.com/EP2z8QwfOn