Was Coronavirus Released From a Chinese Lab? Here's Four Things To Know 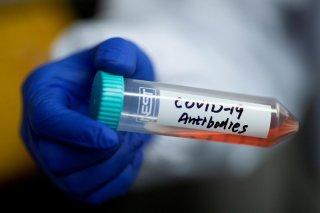 Once dismissed as a conspiracy theory, the notion that the new coronavirus spread from a research lab in Wuhan, China has gained more mainstream backing in academia, the media, and at least one  government.

“There is a credible alternative view … based on the nature of the virus,” a senior British government official told The Daily Mail. “Perhaps it is no coincidence that there is that laboratory in Wuhan. It is not discounted.”

Authorities around the world say Wuhan, the capital of China’s Hubei province, is where the new coronavirus that causes the disease COVID-19 originated.

A South China University of Technology report from February says: “the killer coronavirus probably originated from a laboratory in Wuhan.”

David Ignatius, a liberal columnist with The Washington Post, presented the plausibility that a lab worker spread the virus;  other media outlets quoted medical experts affirming the same possibility.

Still, there is much skepticism.

“Wuhan has 11 million people. It’s likely they have several labs experimenting on animals and researching diseases,” Dean Cheng, senior research fellow for Asian studies at The Heritage Foundation, told The Daily Signal. “We [the United States] have labs across the country working on various diseases.”

Cheng also contended that China’s own conduct of message shifting, denial, and blame only helped the spread of rumors and conspiracy theories as well as the coronavirus.

After a tragic occurrence, humans have a tendency to search for conspiracy theories, said Thomas Spoehr, a retired Army lieutenant general who directs the Center for National Defense at The Heritage Foundation.

“Like a witness at a trial that has a reputation for not being truthful and honest with facts, a jury is not likely to believe them,” Spoehr said. “In this case, people are more likely to assume the worst about China and believe [the new coronavirus] started in a lab.”

Here are four things to know about the Wuhan lab theory.

1. Not a Biological Weapon

First, what it’s almost certainly not.

Although early internet gossip pushed the coronavirus as a biological weapon engineered in a Chinese lab, many experts say there is no credible evidence of that.

A study in mid-March by Scripps Research, published by the journal Nature Medicine, strongly states that COVID-19–also referred to as SARS-CoV-2–follows the natural process similar to related strains of coronavirus.

“This evidence for natural evolution was supported by data on SARS-CoV-2’s backbone–its overall molecular structure,” a statement from Scripps Research says, adding:

If someone were seeking to engineer a new coronavirus as a pathogen, they would have constructed it from the backbone of a virus known to cause illness. But the scientists found that the SARS-CoV-2 backbone differed substantially from those of already known coronaviruses and mostly resembled related viruses found in bats and pangolins.

A leading expert on bioweapons is definitive on the matter.

“There is no evidence whatsoever that this is a bioweapon or that it was accidentally released from the Wuhan lab,” said Michael Osterholm, director of the Center for Infectious Disease Research Policy at the University of Minnesota and author of “Living Terrors: What Our Country Needs to Survive the Coming Bioterrorist Catastrophe.”

“Today, with the genetics we have on these viruses and how we can do testing, we can almost date them almost like carbon testing so radiocarbon and you want to know how old a block is or something like that,” Osterholm said during an interview in March on “The Joe Rogan Experience” podcast.

Osterholm said the new coronavirus “clearly jumped from an animal species, probably the third week of November to humans.”

“I don’t believe that there’s any evidence linking this to … an intentional release or an accidental release, or that it’s an engineered bug. It’s not,” he said.

But the theory that the coronavirus came from an animal does not entirely back up the prevailing wisdom that the virus originated in a wet market in Wuhan, according to recent studies.

About 1.5 million cases of COVID-19 have been confirmed around the world, with 100,000 deaths. The U.S. government has projected at least 100,000 deaths in America before the pandemic passes.

But far deadlier pathogens exist. If the Chinese wanted to develop a biological weapon, Cheng said, it’s likely its communist government would have aimed for something far more lethal than COVID-19.

2. Doubts About Seafood Market in Wuhan

The prevailing wisdom that the virus “was spread by people who ate contaminated animals at the Huanan Seafood Market in Wuhan,” Ignatius wrote in the Post, “is shaky.”

He noted that “bats weren’t sold at the seafood market, although that market or others could have sold animals that had contact with bats.”

Wuhan authorities closed that seafood market and disinfected it without swabbing individual animals and cages, or drawing blood from workers, according to The New York Times.

“It is absolutely clear the market had no connection with the origin of the outbreak virus, and, instead, only was involved in amplification of an outbreak that had started elsewhere in Wuhan almost a full month earlier,” Richard Ebright, a Rutgers University professor of chemistry and chemical biology, told CNN.

A study published Jan. 24 found that the early coronavirus cases were not connected to the Huanan Seafood Market in Wuhan. The study was published in February by The Lancet, a weekly peer-reviewed medical journal.

The study found that the first case was reported Dec. 1, 2019 by an elderly man who had no contact with the Huanan Seafood Market.

One of the report’s co-authors, Wu Wenjuan, a senior doctor at Wuhan’s Jinyintan Hospital, reportedly said the man had Alzheimer’s disease, “lived four or five buses from the seafood market, and because he was sick he basically didn’t go out.”

3. Accidentally Caught in Lab and Spread?

Research labs exist close to the Huanan Seafood Market in Wuhan,  prompting what Ignatius referred to as a “competing theory.”

“Less than 300 yards from the seafood market is the Wuhan branch of the Chinese Center for Disease Control and Prevention,” Ignatius wrote in the Post:

Researchers from that facility and the nearby Wuhan Institute of Virology have posted articles about collecting bat coronaviruses from around China, for study to prevent future illness. Did one of those samples leak, or was hazardous waste deposited in a place where it could spread?

COVID-19 “also could have occurred as a laboratory accident, with, for example, an accidental infection of a laboratory worker,” Ebright, of Rutgers University, told the Post columnist.

Coronaviruses in bats were being studied in Wuhan only at Biosafety Level 2, “which provides only minimal protection,” Ebright said. Biosafety Level 4 is the highest level of security.

In a December video from the Chinese Center for Disease Control and Prevention lab, staffers are seen “collecting bat coronaviruses with inadequate [personal protective equipment] and unsafe operational practices,” the Rutgers microbiologist is quoted as saying in the Post.

Cheng noted that COVID-19 is a new strain of coronavirus, and that Chinese researchers likely didn’t anticipate the need for the highest security level.

“We could require a SWAT team every time you make a police call just as you could always have maximum security in labs, but it would become very costly,” Cheng said.

In the interview with CNN, Ebright said, “The possibility that the virus entered humans through a laboratory accident cannot and should not be dismissed.”

Ebright stressed that there were no “signatures of human manipulation,” but said a lab worker might have contracted the disease and accidentally spread it.

Chinese news articles from 2017 and 2019 described in heroic terms how Wuhan CDC researcher Tian Junhua, capturing bats in a cave, “forgot to take protective measures” and that “bat urine dripped from the top of his head like raindrops,” Ignatius wrote, quoting the articles.

ResearchGate published the South China University of Technology study, which said: “It is plausible that the virus leaked around and some of them [lab workers] contaminated the initial patients in this epidemic, though solid proofs are needed in future study.”

In summary, somebody was entangled with the evolution of 2019-nCoV coronavirus. In addition to origins of natural recombination and intermediate host, the killer coronavirus probably originated from a laboratory in Wuhan. Safety level may need to be reinforced in high risk biohazardous laboratories. Regulations may be taken to relocate these laboratories far away from city center[s] and other densely populated places.

One of the Wuhan CDC researchers quarantined himself after being exposed to bat blood, and also found a tick on the bat that could have spread the disease, according to the university report.

At a time when China was suppressing information on COVID-19, the authors withdrew the report.