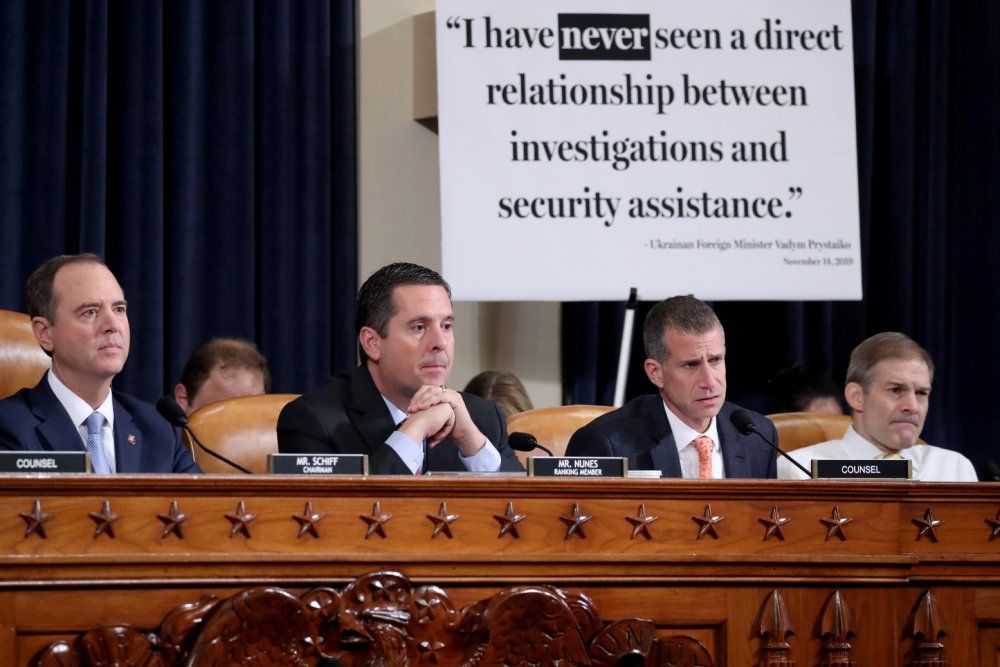 Journalists, pundits and politicians accused President Donald Trump of witness tampering after he tweeted at former U.S. Ambassador to Ukraine Marie Yovanovitch during her testimony Friday.

Journalists, pundits and politicians accused President Donald Trump of witness tampering after he tweeted at former U.S. Ambassador to Ukraine Marie Yovanovitch during her testimony Friday.

Yovanovitch, who said she felt threatened by Trump while working under him, was testifying before the House Intelligence Committee during the second day of public impeachment hearings when the president tweeted about her.

“Everywhere Marie Yovanovitch went turned bad. She started off in Somalia, how did that go? Then fast forward to Ukraine, where the new Ukrainian President spoke unfavorably about her in my second phone call with him. It is a U.S. President’s absolute right to appoint ambassadors,” Trump tweeted during the testimony.

“They call it ‘serving at the pleasure of the President.’ The U.S. now has a very strong and powerful foreign policy, much different than proceeding administrations. It is called, quite simply, America First! With all of that, however, I have done FAR more for Ukraine than O.,” he continued.

House Intelligence Committee Adam Schiff accused the president of witness intimidation during the hearing and read Trump’s tweet aloud to the room.

“As we sit here testifying the president is attacking you on Twitter,” Schiff said, adding, “I want to let you know, ambassador, that some of us here take witness intimidation very, very seriously.”

Fox News host Bret Baier called Schiff’s reading of the tweets a “turning point” in the hearing in a Friday tweet.

He added that Yovanovitch “was already a sympathetic witness [and] the President’s tweet ripping her allowed Schiff to point it out real time characterizing it as witness tampering or intimidation -adding an article of impeachment real-time.”

That was a turning point in this hearing so far. She was already a sympathetic witness & the President’s tweet ripping her allowed Schiff to point it out real time characterizing it as witness tampering or intimidation -adding an article of impeachment real-time. https://t.co/HSCkGMIqmH

Various pundits, journalists and politicians — both Republicans and Democrats — agreed with Schiff’s designation of the tweet as “witness intimidation.”

Witness intimidation is a crime, no matter who does it. Full stop.

Trump himself is clearly not satisfied with only one article of impeachment.

His choice to publicly broadcast his own, personally authored witness intimidation means he’s wants to sign up for another article on obstruction of justice, too. https://t.co/wYvH92CMHb

Witness intimidation is a federal crime.

It is also an impeachable offense #AbuseOfPower.

Expect witness tampering to be an article of impeachment. https://t.co/HtcXcbVgms

Others, however, argued that Trump’s tweets should not be considered “witness tampering.” Republican Texas Sen. Ted Cruz, for example, called the claim “ridiculous.”

This may be the single most ridiculous claim of the Dem show trial. No, the President’s tweeting is not “witness intimidation.” You may not like the tone of some or even many of his tweets, but it’s absurd to suggest that tweeting is an impeachable “high Crime [or] Misdemeanor.” https://t.co/afuu4OWUb3

“Furthermore, it clearly hasn’t changed the fact that the witness is testifying willingly and sticking to her script,” he added.

2. Furthermore, it clearly hasn’t changed the fact that the witness is testifying willingly and sticking to her script.

As for Trump’s tweet, to call it witness intimidation is laughable. People can say whatever they want about Trump and he can’t say what he thinks? The witness has every right to speak her mind and he can speak his. If witnesses are so intimidated, why do they keep showing up?

Democrats bemoaning the lack of explanation for Ambassador Yovanovitch’s dismissal. The President is TRYING to explain the reason behind the reason behind his constitutionally sanctioned action on Twitter, & it’s called “witness intimidation.” He can’t win with these Democrats. pic.twitter.com/f8otyfw0Wr