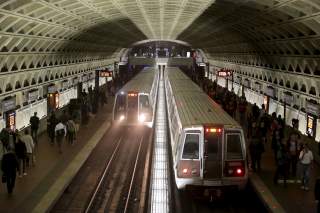 As the United States government has been attempting to stem the pandemic of coronavirus, the disease has been spreading in its own backyard.

While not as serious as the outbreaks in Washington state or around New York City, Washington D.C. and the rest of Northern Virginia have become one of the hotspots where coronavirus has spread. The total number is twenty-three cases.

The first reported case in the area, that of a priest in Georgetown, was not connected to any known outbreaks. Patient zero had not come into contact with any known carriers and had no history of international travel. This currently explained development did not prevent the man from giving communion to hundreds of congregants over a period of two weeks. The organist, who is also infected, played at a funeral as recent as March 6. Attendees of the church have been advised to self-quarantine in an attempt to prevent further outbreak. At least one attendee, a resident of Virginia, has been diagnosed with coronavirus after attending services.

The priest was the first of four people residents of the District of Columbia who has been diagnosed. The other nineteen are split evenly between Virginia and Maryland. Multiple cases in those states stem from individuals returning from a cruise on the Nile river in Egypt.

The mayor’s office sent out a health advisory this afternoon. “DC Health recommends that non-essential mass gatherings, including conferences and conventions, be postponed or canceled,” it said. “We also recommend that any social, cultural, or entertainment events where large crowds are anticipated be reconsidered by the organizer. This recommendation is in effect through March 31.” The city defines mass gatherings as those with over a thousand people in attendance.

This has resulted in the postponement of the annual St. Patrick’s Day parade that was meant to be held on Monday, and the D.C. Defenders football game that was planned for Sunday. However, the owners of Capitol One arena announced that they will not be closing, and that Cap games and concerts will proceed as normal.

Universities in the area are taking the situation seriously. The University of Maryland, John Hopkins University, and American University have all suspended in-person classes. Students’ semesters will continue online for at least two weeks.

Governor Ralph Northam of Virginia has not yet declared a state of emergency, a measure that Maryland Governor Larry Hogan implemented six days ago. The Virginia legislature is planning to meet on Thursday to appropriate funding for the crisis.

Meanwhile, on the national level, anxiety has been increasing on capitol hill as members of Congress try to find an answer to the panic while avoiding contracting the disease themselves. “It's like preparing for a hurricane," said Rep. Lois Frankel of Florida, "which is, you've got to be prepared and hope for the best."