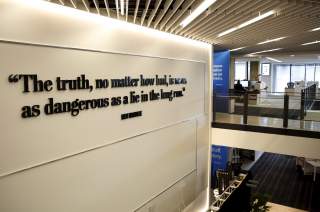 A woman thanked a Washington Post food critic Wednesday for unwittingly outing a man she said was her cheating husband during one of his reviews.

The woman thanked WaPo’s Tom Sietsema during one of his weekly online Q&A for snapping the picture with a mystery woman in a recent restaurant review.

“Well Tom your latest review is accompanied by a picture of my husband dining with a woman who isn’t me!” the woman wrote. “Once confronted with photographic evidence, he confessed to having an ongoing affair.”

In true Thanksgiving fashion, the woman thanked Sietsema for revealing her alleged two-timing husband’s affair. “This Thanksgiving I’m grateful to you for exposing a cheat!”

Sietsema later told his Twitter followers about the woman’s post, saying in a Wednesday afternoon post: “Cheaters, take heed!”  Other Americans are finding different ways to say thanks on Thanksgiving day.

More than 50 million Americans are traveling Thursday to see loved ones, the American Automobile Association reported Tuesday. They are making the plans despite facing the potential of dealing with heavy storms in parts of the country.

Amtrak is expecting to see about 846,000 passengers. Every working train car will be used to help with the demand, CNBC reported Tuesday, which is an increase of nearly 3% and is the largest amount of people traveling since 2005.