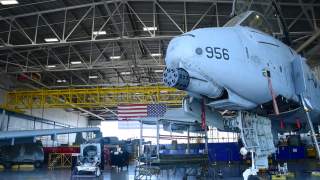 The first in-flight testing of the GAU-8 was done on Feb. 26, 1974 and the gun was fired for the first time in flight with combat ammunition on Jun. 19 of the same year.

The impressive video in this post is probably the only footage you’ll find where you can hear the A-10’s cannon, the powerful GAU-8/A Avenger, firing without delay, so turn up the volume.

On Nov. 16, 1970, the U.S. Air Force (USAF) issued a request for proposal for a 30mm rapid fire cannon to use in the A-X Close Air Support aircraft. In June of 1971 General Electric and Philco Ford were selected to build the prototype gun, designated GAU-8. Besides development of the gun, the contract called for the development of four types of ammunition: Armor Piercing Incendiary, High Explosive Incendiary, Semi-Armor Piercing High Explosive and Target Practice.

The contracted specifications directed the gun be capable of destroying a wide variety of targets expected to be encountered during a close air support (CAS) mission: light, medium and heavy tanks, armored personnel carriers, and fixed or mobile artillery. Furthermore the specifications called for the gun to be capable of destroying hardened targets like bunkers and equipment within revetments.

The GAU-8 wasn’t ready for the AX fly-off competition between the Northrop A-9A and the Republic A-10A, so the General Electric M61A1 “Vulcan” 20mm cannon was installed for initial weapons testing of the two aircraft.

Noteworthy Hughes Tool Co. was awarded a development contract for the GAU-9 (a license-built version of the Swiss Oerlikon 304RF 30mm cannon) to be used in case the GAU-8 program failed. The GAU-9 was tested against the GAU-8 in the spring of 1973 but was inferior to the Avenger so development was halted on the GAU-9.

The first in-flight testing of the GAU-8 was done on Feb. 26, 1974 and the gun was fired for the first time in flight with combat ammunition on Jun. 19 of the same year. The Avenger fired more than 39,000 rounds of ammunition during approximately 60 test flights. The gun was tested in a wide variety of flight profiles: from as high as 25,000 feet to as low as 100 feet; at speeds ranging from 135 knots to 415 knots; in all attitudes (various roll, pitch and yaw) with up to five G’s.

The test program went smoothly and the first test mission cancellation didn’t occur until Nov. 12, 1975, when the gun jammed. The test program identified a few problems including gun residue buildup on the canopy and problems with gun gas ingestion into the engines. Both problems were solved and fixes were incorporated into production aircraft beginning with aircraft No. 16 (earlier aircraft were retrofitted with the fixes).