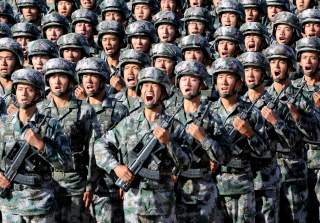 On Aug. 1 a video titled “I am a Chinese Soldier” began circulating in China and quickly went viral on social media as the country marked Army Day.

The slick, 2 min 20 second production emphasizes the personal sacrifices made by members of the People’s Liberation Army (PLA), who leave their families behind to resolutely defend the nation and its claimed territory.

The video is brimful with the grandiosity that is now associated with the military under Xi Jinping: a lot of ammunition is fired, and the very latest in China’s military technology — combat aircraft, a carrier battle group, long-range ballistic missiles, submarines and armored vehicles — is on full, proud, active display.

As some watchers have observed, the world depicted in this video is very much a man’s world — there isn’t a single female soldier; the few women who appear are mothers and spouses, tearfully enduring, no doubt with the full patriotism that is expected of them by the Chinese Communist Party, the absences and heart-rending departures of sons and husbands. At times serene and towards the end bombastic, the accompanying soundtrack could have been written by Hans Zimmer (think his majestic score for Terrence Malick’s The Thin Red Line).

This is a very well done production, and no doubt it will have appeal among the (male) target audience. It inspires pride, but admittedly, for those who, in an ever widening circle, are potentially on the receiving end of those sentiments (and this arsenal), it can be a little chilling — especially when the narrator (one of the soldiers in the video) utters the phrase “peace behind me, war in front of me,” as if war were inevitable.

The narration (translated from Chinese):

I am the one the mother cannot reach at the door.

I am the wife who is reluctant to hang up the phone.

I am a stranger who dares not approach in the eyes of my son.

I am the concern and pride of my loved ones.

Peace behind me, war in front of me.

Pick up the steel gun, we must let go of the children.

Put on the military uniform, we must give up comfort and ease.

Fighting the battlefield, the character of the man.

From the military to the country, there is no regret in this life.

I am a Chinese soldier.

I am a soldier of the people.

I am the guardian of a good life.