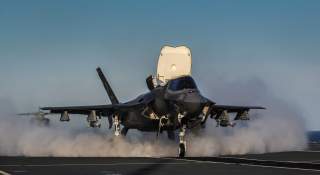 Key Point: “It’s an F-35 at NTTR (Nellis Test and Training Range), I could be wrong, but it [seems to be] dropping five Paveway IVs and hitting all five targets with GEOT (Good Effect On Target).”

(This article first appeared in the spring of 2019.)