Watch This Fighter-Bomber Land, Reverse and Take Off in the Opposite Direction 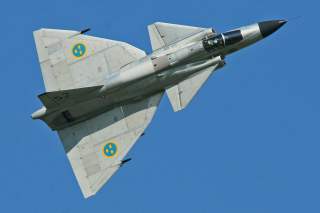 Taken on Aug. 16, 2019, this amazing video in this post features Saab Viggen SK 37E from the Swedish Air Force Historic Flight (SwAFHF) performing at the Zigermeet 2019 AirShow at Mollis Air Base, Switzerland.

What makes this clip unique is that at 06:31 the SK 37E lands, reverses, and takes off in the opposite direction. Quite unusual for a fighter bomber!

The Saab 37 Viggen featured an extremely advanced aerodynamic configuration for its time, combining a main delta wing with delta-shaped canard foreplanes. As told by Jan Jørgensen, Anders Nylén and Peter Liander in their book Saab 37 Viggen – The ultimate portfolio, this unconventional design enabled the Viggen to meet the Swedish Air Force requirement for speed of Mach 2+ at high altitude and ability to operate from 500 m runways.

To keep the landing distance short Saab developed a thrust-reverser integrated with the rear fuselage, still the only one if its kind on single-engined aircraft. The Viggen was powered by the Volvo Flygmotor RM8A/B afterburning turbofan.

The SK 37 was the trainer variant of the Viggen. It was designed simply by adding an extra cockpit behind the cockpit of the single-seat Viggen, given the Skol-Viggen a very distinctive configuration with two separate canopies.

During 1998-2000 the Swedish Air Force carried out a comprehensive modification program to convert 10 SK 37s into SK 37E Electronic Warfare aggressors, taking over the role of the J 32E Lansen which had been retired a few years earlier. The SK 37E variant became referred to as jammer-Viggen.