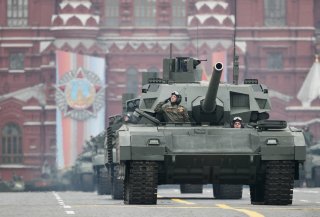 The call goes over the radio as three T-14 Armatas – Russia’s most advanced tank – explode under a salvo of missiles.

Their killers -- American attack helicopters – swoop away in search of fresh prey. They quickly find it in the form of what looks T-15s – the armored troop carrier version of the Armata. The T-15s are also wiped out.

None of this was real. The battlefield was fictional, the Armata tanks just entering service now, while the Invictus attack helicopters – assuming the U.S. Army even buys them – wouldn’t be in service for another decade.

Nonetheless, this video game-style presentation by Invictus manufacturer Bell (you can see the video here) is interesting. Not because a defense contractor is putting out promotional materials in hopes of winning a lucrative Pentagon contract. That’s a common enough practice.

What’s different here are the enemy weapons. They’re not the traditional Cold War Soviet equipment, the T-72 tanks and BMP troop carriers (or “generic” enemy weapons that happen to look like them) that you might find in a marketing brochure or an entertainment video game.

It’s a new generation of Russian equipment that has the dubious honor of being destroyed by the U.S. defense industry. For example, another Bell video shows an animated Invictus obliterating an enemy air defense battery. But it’s not a battery of Cold War SA-6 missiles or ZSU-23-4 flak guns: the sacrificial weapons are S-400s, Russia’s advanced long-range anti-aircraft missile.

The first Bell video does show a foot soldier firing a shoulder-fired anti-aircraft missile at an Invictus, which successfully deflects it by releasing a salvo of decoys. In real life, the Invictus and other helicopters and aircraft would face a formidable and plentiful array of Russian air defense weapons, including the S-400, the Pantsir and Tunguska self-propelled anti-aircraft missile/gun combos, and even Russian attack helicopters armed with air-to-air missiles. NATO planners worry that even stealth aircraft such as F-35 would have difficulty operating over Eastern Europe.

When queried by the National Interest, a Bell spokesman said that decision to include the Armata and the S-400 in the video probably resulted from a desire to depict the battlefield around 2030, when the U.S. Army plans to field a new generation of scout helicopters.

And those helicopters will be formidable. The Invictus (Latin for “unconquered”) is Bell’s contender for the Army’s Future Attack Reconnaissance Aircraft (FARA) program, which seeks to replace the 1960s Bell OH-58 Kiowa scout helicopter with a modern design. The Army has been searching for a replacement for the Kiowas since the 1980s,  including several abortive projects such as the RAH-66 Comanche, canceled in 2004 after $7 billion had been spent on the project.

There are now five contenders for the FARA contract, which seeks to replace the Kiowa by 2028, including AVX, Bell, Boeing, Karem and Sikorsky. They must meet certain FARA requirements, including being armed with a 20-mm cannon and an integrated munitions launcher, as well as Improved Turbine Engine Program propulsion.

Bell’s Invictus is a sleek design (though not stealthy, which the Army isn’t looking for) based on Bell’s 525 Relentless medium-lift helicopter. The Invictus cruises at 180 knots, has a payload of 1,400 pounds and a combat radius of 135 nautical miles that includes 90 minutes of loiter time on station.

It's natural that a defense manufacturer would depict its next-generation helicopter battling next-generation enemy equipment. But it’s also a reminder of how military technology passes on. Just as the Vietnam-era Huey helicopters have faded, so eventually will the B-52s, F-15s, A-10s and all the other equipment that the Cold War baby boomers grew up with.

Michael Peck is a contributing writer for the National Interest. He can be found on Twitter, Facebook. or on his Web site. This article appeared last month.