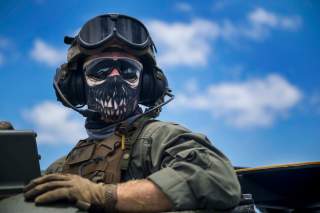 For going on 17 years, Sgt. 1st Class Richard Stayskal has served, fought, and bled for his country; first as a Marine infantryman, when he survived a gunshot wound to the chest during a firefight in Ramadi, Iraq, in 2004; and then as a U.S. Army Green Beret, deploying overseas multiple times.

Now, he's fighting a battle against terminal lung cancer that his military care providers failed to catch, and in the process, Stayskal is taking on a 69-year-old legal rule known as the Feres Doctrine which bars service members and their families from suing the government for negligence or wrongdoing.

On April 30, Stayskal was one of three victims of military medical malpractice to testify before Congress on the Supreme Court precedent that bars them from having their day in court.

"This does affect me obviously, but my children are definitely the true victims along with my wife," Stayskal, who has two daughters, said during the House Armed Services Subcommittee on Military Personnel hearing. "The hardest thing I have to do is explain to my children when they ask me 'this doesn't make sense, how is this happening?' and I have no good answer to give them and that's why I'm coming up here to help convince these folks in Congress to change this."

Stayskal first became aware something was wrong with his health in March 2017 while at Special Forces Dive School in Key West, Florida. For the first time in his life the physically fit combat veteran had trouble keeping up with his training. Unable to catch his breath and easily fatigued, he was sent home to Fort Bragg, North Carolina. From there his health worsened.

Over the next several months he began to wheeze and had trouble breathing when lying on his back. Other times his body would go numb and his vision blurry. Sometimes he would cough up blood, a teaspoon at first, but it was more by the day. Stayskal visited military doctors multiple times, including two emergency room visits — one to Womack Army Medical Center on Fort Bragg, and another out in town — but answers proved elusive. The best guess: Walking pneumonia, and asthma.

It wasn't until July 2017 when he was finally able to see a civilian specialist out in town, that he found the cause of his declining health: He had lung cancer.

What's more, is that a CT-scan taken of his chest six months earlier at Womack Army Medical Center showed a mass on his lung. Stayskal and his attorneys with Whistleblower Law Firm in Tampa, Florida allege that care providers failed to properly identify the mass for what it was, and that if the cancer had been caught back in January, something could have been done. The cancer has since metastasized to his pelvis, spinal bones, lymph nodes, liver, spleen, and is terminal.

During the hearing, Stayskal said that his faith in the military healthcare system has been shaken.

"I believe it violates the trust completely. When I signed up to do my job I was told 'this is your job you will do this to the best of your abilities no questions asked,'" he said. "I believed that when the DoD said they'd provide me adequate medical care to a standard, and they failed that portion. My trust is completely broken."

Despite the mistakes made, Stayskal, and medical malpractice victims like him are unable to sue the government for negligence or wrongdoing, due to the Feres Doctrine.

Feres is the product of the 1950 Supreme Court case Feres vs. United States, which found that the federal government could not be held liable "for injuries to members of the armed forces arising from activities incident to military service." In the decades since, the legal rule has been applied to a broad swathe of instances that extend far beyond the battlefield, to include medical malpractice, sexual assault, and training mishaps.

A major critique of the Feres Doctrine is that it creates a double standard when it comes to who can sue for monetary damages: One set of rules for civilians, and another for those in uniform.

Because the Feres Doctrine stems from a ruling in the nation's highest court it can only be changed two ways: Either the Supreme Court can overturn its initial decision, and there's currently a petition for a Feres Doctrine case pending in the Supreme Court; or Congress could amend the Federal Tort Claims Act — a law which allows citizens to sue their government for negligence or wrongdoing — to allow medical malpractice cases.

"This Doctrine has effectively barred hundreds of service members from any chance to be made whole for receiving negligent medical care that is given by the government provider to service members on active duty," Stayskal testified. "The only difference between a military provider and a civilian provider is that a military provider wore fatigues to work that day and his or her patients do not have a choice accepting their services."