Watch out China, India May Be Getting the Super Hornet for Its Aircraft Carrier 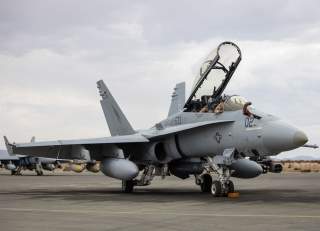 Boeing is vying for a Indian Navy contract for 57 new fighter jets to operate from its next aircraft carrier INS Vikrant.

Dan Gillian, Boeing’s program manager for the F/A-18 and EA-18G, told Economic Times that his company had done simulations of the Super Hornet taking off from a ski jump and the aircraft can be launched with a ‘significant’ payloadwithout any modifications.

He added that the F/A-18 will be tested from a U.S. Navy ski jump as well.

“We have answered queries from the Indian Navy and the simulation analysis is done. At some point we will also take off from a US Navy ski jump. We feel very comfortable that we will pass the requirements with a meaningful and significant payload,” Gillian said.

Boeing is vying for a Indian Navy contract for 57 new fighter jets to operate from its next aircraft carrier INS Vikrant. The Super Hornets would replace the service MiG-29Ks that are facing problems with engines and electronic control systems. These issues resulted in serviceability of the airplanes varying between 16 per cent and 39 per cent meaning that out of fleet 10 fighters only 3 were normally available for operations at given time.

Gillian added that talks are on with both the Indian Navy and the Indian Air Force (that has a requirement for 116 new fighter jets). Boeing in fact is looking for a partnership with Indian manufacturers Mahindra and Hindustan Aeronautics Limited (HAL) to present a proposal under the Make in India initiative. “HAL has built airplanes for years and Mahindra too has manufacturing knowhow. A public private partnership will bring it together and we will build a brand new first class facility in India. It will help India build its next plan for the advanced multirole combat aircraft as well,” Gillian concluded.