Watch Out: India's Army Is Getting Israeli-Made Machine Guns 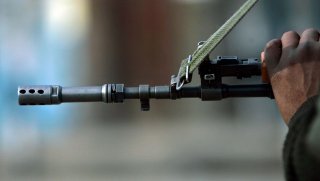 Last week the Indian Ministry of Defence announced that it had signed a contract with Israel Weapons Industries (IWI), in which the Indian Army would procure more than 16,000 light machine guns for use with its frontline troops.

According to a release from the Press Information Bureau of the Government of India, “The Indian Armed Forces’ long-standing requirement of a modern state-of-the-art Light Machine Gun (LMG) has finally fructified. The Acquisition Wing of Ministry of Defence has signed the capital acquisition contract with Israel Weapons Industries for procurement of 16,479 LMGs at a cost of Rs 880 crore with the approval of Raksha Mantri Shri Rajnath Singh. The contracted Negev 7.62X51 mm LMG is a combat proven weapon and currently used by several countries around the globe. This LMG will greatly enhance the lethality and range of a soldier vis-a-vis the presently used weapon.”

The Ministry also called this provisioning “operationally urgent” while it described the IWI NG7 as a “very critically needed weapon (that) will boost the confidence of the frontline troops and provide much needed combat power to the Armed Forces.”

The project was greenlit in February of 2018, and the Indian newspaper Economic Times reported that the light machine guns were being procured under the Fast Track Procedure (FTP), which was to ensure “expeditious procurement for urgent operational requirements of the regular and special forces.” The FTP is typically applied in cases where there has been an unforeseen delay, and where it could affect the capacity of the forces.

The select-fire IWI Negev NG7 light was first introduced in 2012. The general-purpose machine gun has a weight of 17.41 pounds, and is chambered in the 7.62x51mm NATO round. It has two operation modes, including semi-automatic and fully automatic fire, and it is fed by either a 100- or 125-round assault drum magazine. The NG7 (NG stands for Next Generation) is used by the Israel Defense Forces as well as many operators around the world.

The IWI Negev NG7 was selected over similar firearms, from the South Korean S&T Motiv, American Sig Sauer, Australian Thales and the UAE’s Caracal. The Economic Times reported that Sig Sauer had won the contract to sell the Indian military assault rifles.

IWI, formerly the Magen division of Israel Military Industries was founded in 1933 and was privatized in 2005, has been in partnership with the Indian military since May 2017, when the India-based private sector firm Punj Loyd began work with the Israeli firm to jointly produce a range of small arms that had been developed in Israel. At the time of the announcement of the that venture, Punj Lloyd Raksha Systems, or PLF, it was estimated that it would tap a solid chunk of India’s small arms market, which was estimated at more than $5 billion.

Peter Suciu is a Michigan-based freelance writer who has contributed to more than four dozen magazines, newspapers and websites. He is the author of several books on military headgear including “A Gallery of Military Headdress,” which is available on Amazon.com.