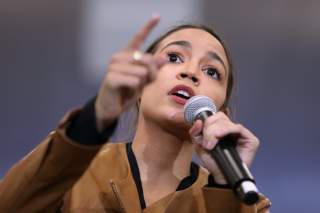 A “conservative squad” formed to take on Democratic New York Rep. Alexandria Ocasio-Cortez and her “squad,” and the four spoke on “Fox & Friends” Thursday about their fight.

All four are running for congressional seats in 2020 and hit back at Democratic socialists.

“We are losing the younger generation of this country,” Taylor said. In her first campaign advertisement when announcing a run for Congress in October, Taylor promised to form a squad to represent Republicans.

Mace added that Democrats “have taken a sharp left turn under the influence of the socialist squad.” After mentioning her background working her way up from a waitress at Waffle House to a congressional candidate, Mace noted that for her, the fight is about combatting socialism for her family and the country.

“And you look at us, this is socialism versus American values of freedom and job creation,” Mace said. “And we all understand up here today that people flourish under freedom. … Enough is enough. My kids and country are worth fighting for. And that’s what this is about, essentially.”

Van Duyne echoed Mace’s commentary, saying America has a “Congress that’s run by extremists.” She noted that people are “sick” of the inaction.

“They [Democrats] are not doing anything,” Van Duyne said. “And I think people are sick of seeing that. They really want to see people who are going to go to Congress and do what they say they are going to do, which is the meat and potatoes of getting things done for Americans.”

The conservative squad has even formed a website for their cause.

“This is not your grandfather’s GOP anymore,” Mace added.