Watch Out: Ukraine's Military Is Much Better Than It Was in 2014 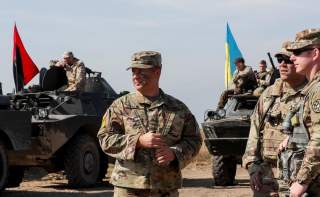 It is indisputable that the main criterion for assessing the armed forces of any country is its ability to effectively perform tasks under wartime conditions. Nevertheless, the ability to use the defense budget as efficiently as possible can be an equally important way of assessment—when each unit of investment can achieve the greatest possible positive net effect. This approach is especially useful to understand the changes that have taken place in Ukraine’s armed forces since 2014.

Since the start of confrontation with Russia, Ukraine’s defense spending has increased several times. In 2013, the budget of the armed forces of Ukraine was 15.2 billion hryvnia; in 2017, this figure was 64.4 billion hryvnia. In 2018, Ukraine has allocated a record 86.14 billion hryvnia for defense needs. However, such a spectacular growth looks less radical if you present the dynamics of the Ukrainian defense budget in dollar terms. Ukraine spent $1.9 billion on defense in 2013, $2.35 billion in 2017 and $3.02 billion in 2018. In dollar terms, the military’s budget has not seen a significant increase over the last four years.

However, compared to early 2014, Ukraine’s armed forces have improved considerably. First of all, the Ukrainian armed forces have grown from 157,000 (of which 120,000 were servicemen) in 2014 to 250,000 (of whom 204,000 are servicemen) today. At the same time, in the beginning of Russian aggression, only six thousand people—one brigade—were in complete readiness and able to execute the political leadership’s orders. In 2013, the armed forces of Ukraine did not conduct any training at the brigade or regimental level. In 2016, the White Book of Ukraine’s ministry of defense logged twenty brigade-level exercises; ground forces conducted twenty-six exercises at the brigade level in 2017.

Ukraine’s air force has also qualitatively changed for the better. Today, the air force has as many as seventy-one fully functioning fourth-generation fighters (Su-27s and MiG-29s). The air force has also increased the number of flying hours per crew from thirty-six to forty-six hours per year. Between 2014 and 2017, up to sixty fighters and bombers were modernized or repaired. Additionally, work is underway to repair air-defense systems. By mid-2017, up to 65 percent of S-300PS/PT1s and 20 percent of Buk-M1 systems were repaired. Today the armed forces have twenty-five divisions of the S-300PS/PT1 systems, ten Buk-M1 divisions and one S-300V1 division.

Activities in missile development are also worth mentioning. State trials of the Vilha system are planned for March 2018. This surface-to-surface missile system was developed on the basis of the Smerch multiple-launch rocket system. It will allow Ukraine’s armed forces to conduct precision strikes as far away as 120 kilometers and serve as a replacement of the outdated tactical missile complex Tochka-U. Development of the Neptune antiship cruise missile is also underway. The missile’s first public tests were conducted in January of this year. Once testing is completed, Neptune will be deployed as a coastal missile complex, and eventually be installed on missile boats and fighter jets.

Over the past four years, Ukraine has managed to strengthen its defensive capabilities without a radical increase in funding. One reason for this is that the proportions of the defense budget distribution have changed: the share for procurement and modernization for weapons increased by 10 percent since 2014. To understand how allocated funds are spent, it should be mentioned that in 2013, Ukraine spent 10 percent ($190 million) of its military budget on procurement—only got two modernized airplanes, five different radar systems, one training complex for pilots, 194 navigation devices and twenty-eight radios! Another reason is the development of an internal audit and control system—as stipulated in the Strategic Defense Bulletin—which helps to effectively utilize scarce resources. Overall, available resources are being marshalled more efficiently. Ukraine has made more strides to eliminate gaps in combat readiness in four years than in the previous twenty.

Mykola Bielieskov is Deputy Director of the Institute of World Policy in Kiev, Ukraine. This first appeared in February 2018.