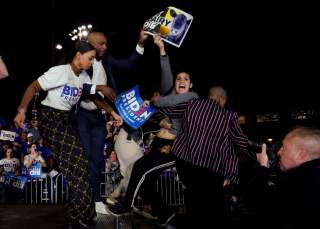 A top adviser to Joe Biden put on a Pro Bowl-worthy performance Tuesday when she tackled a protester who stormed the stage as the former vice president gave a speech in Los Angeles.

The first protester hopped on stage and was removed by an unidentified man who appears to have been part of Biden’s security team.

Sanders is seen on video sprinting up to the protestor, wrapping her arms around her and dragging her off stage as Biden stood by his wife and sister.

Sanders’ performance drew praise from viewers for her awareness, agility, and tackling form.

Sanders commented on the drama, writing on Twitter: “I broke a nail.”

I broke a nail. #SuperTuesday