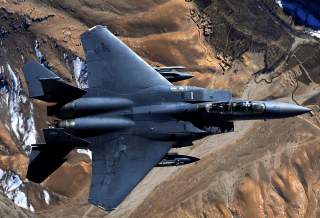 The Strike Eagle was the first of three special colored 48th FW F-15Es and was painted in the skin of a P-47 Thunderbolt, the primary aircraft used by the wing during its service in World War II.

“This heritage project is about the 48th Fighter Wing legacy, and more specifically the wing’s support to the D-Day invasion during World War II,” said Col. Will Marshall, 48th Fighter Wing commander in a RAF Lakenheath press release.

“It’s kind of a mesh of the old with the new; it’s a P-47 and F-15 hybrid,” said Tech. Sgt. Casey Cheff, 48th Equipment Maintenance Squadron Corrosion Control Section non-commissioned officer in-charge. “We had 25 designs we thought of and managed to work that down to three. It ended up being a great opportunity for training our crew.”

A checkered pattern on the nose, black stripes down the wings, several national insignias, which labeled the aircraft as U.S. during WWII, and a Statue of Liberty painted on the tail were several of the major elements of the paint job according to Cheff.

The 492nd and 494th Fighter Squadrons based at RAF Lakenheath are the only two Strike Eagle squadrons in U.S. Air Forces in Europe (USAFE) and Air Forces Africa.

The Mach Loop (also known as the Machynlleth Loop) consists of a series of valleys in the U.K. in west-central Wales, which are famous for their use as low-level training areas for fast jet aircraft. The system of valleys lies 8 miles east of Barmouth and is nestled between the towns of Dolgellau to the north and Machynlleth to the south, from the latter of which it takes its name.

The training area is within LFA7, which covers most of Wales. Aircraft which use (and which have used in recent years) this training area include Royal Air Force (RAF) Airbus A400M, Tornado, Typhoon, Hawk jets and C-130J as well as USAF F-15C Eagles, F-15E Strike Eagles, F-22 Raptors, and F-35A Lightning IIs.