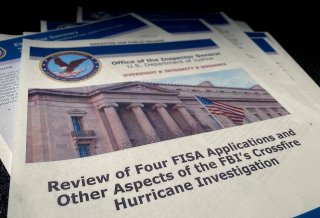 The Daily Caller News Foundation and the watchdog group Citizens United sued the Justice Department and its inspector general on Tuesday for a slew of records from the watchdog’s report on the FBI’s abuse of surveillance of the Trump campaign.

Citizens United filed the Freedom of Information Act lawsuit on behalf of the DCNF related to public records requests that both organizations filed Feb. 24.

The lawsuit, filed in federal court in Washington, D.C., seeks all transcripts, summaries and notes from 27 individuals interviewed as part of the inspector general’s probe, including Christopher Steele, the author of the Trump dossier, and former FBI executives like James Comey and Andrew McCabe.

Citizens United filed the lawsuit after the DOJ and IG’s office failed to provide documents within the 20-day window required under the Freedom of Information Act.

The lawsuit could reveal information not included in the IG’s 434-page report of its investigation into the FBI’s Crossfire Hurricane probe.

The IG released a report on Dec. 9, 2019, that blasted the FBI over a series of “significant” errors and omissions in applications for Foreign Intelligence Surveillance Act (FISA) orders against Carter Page, the former Trump campaign aide.

The Justice Department on Friday declassified three footnotes from the report that revealed the bombshell that the FBI received evidence in 2017 that Russian operatives fed disinformation to Steele, whose dossier was “central and essential” to the FBI’s decision to seek FISAs against Page.

The FBI failed to provide the FISA Court with exculpatory information that undermined the bureau’s theory that Page and other Trump campaign advisers were conspiring with Russia to influence the 2016 election, according to the report.

FBI investigators also failed to verify Steele’s dossier before citing it extensively in the FISA applications.

Ohr served as a liaison of sorts between Steele and the FBI. His wife Nellie Ohr worked as a contractor in 2016 for Fusion GPS, the opposition research firm that hired Steele on behalf of the Clinton campaign and DNC. The lawsuit also seeks her IG records.

Laufman, who served as chief of the DOJ’s counterintelligence and export control division, played a key role in setting up an interview for FBI agents and Steele’s primary source for information in the dossier.

The source disputed many of the allegations that Steele attributed to him in the dossier, but neither Laufman nor the FBI agents who took part in the interview informed the FISA Court about the source’s rebuke of Steele’s information.

The IG’s records of interviews with State Department official Kathleen Kavalec are also a target of the lawsuit.

Citizens United previously obtained Kavalec’s notes from an Oct. 11, 2016, meeting she had with Steele, which showed that the former spy provided several inaccurate pieces of information about Russian efforts to interfere in the 2016 election.

The lawsuit also seeks records involving two FBI agents involved in Crossfire Hurricane who the bureau has not officially confirmed were involved in the investigation.

They are referred to as “Case Agent 1″ and “Handling Agent 1” in the IG report.

Case Agent 1 is cited in the IG report as being “primarily responsible” for some of the “most significant” errors in the FBI’s surveillance of the Trump campaign.  The New York Times has reported him to be Stephen Somma, a counterintelligence investigator from the New York field office.

Steele’s primary FBI handler, “Handling Agent 1,” has been identified in multiple news reports over the years as Michael Gaeta, an FBI legal attaché in Rome. Steele met with Gaeta on July 5, 2016, and provided him the first two memos from his dossier. Gaeta also arranged and attended an Oct. 3, 2016, meeting with Steele and a group of FBI agents.