We Can Prove It: This Plane Has Better Stealth and Is Faster Than an F-22 Raptor 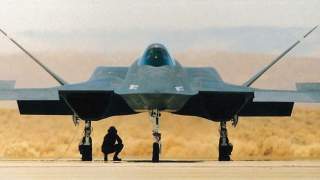