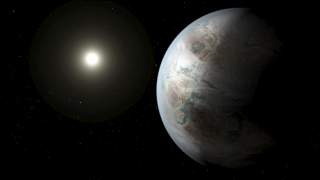 Most exoplanets, bodies orbiting stars other than the sun, are too far away for us to be able to send probes to. So it’s no wonder that the discovery of a possible habitable planet around the sun’s nearest neighbour star, Proxima Centauri, a few years ago generated a lot of excitement. Now we have spotted what we think is a second planet around this star.

Our study, published in Science Advances, suggests this planet could have a mass about half that of the planet Neptune. Dubbed Proxima Centauri c (abbreviated to Proxima c), it has an orbit about 1.5 times greater than the Earth’s orbit around the sun.

The star Proxima Centauri is the smallest star in a triple system in the constellation of Centaurus. Since it is the star in closest proximity to our sun, it is usually referred to as Proxima. It wasn’t discovered until 1915 by the Scottish astronomer Robert Innes because it is too faint to see with the naked eye. Like most stars, Proxima Centauri is a cool, small object known as a “red dwarf” star. It is about eight times less massive than the sun and has about half its temperature.

The previously discovered planet Proxima b is (most likely) a rocky planet orbiting the star within its habitable zone. However, Proxima c orbits relatively far from its cool star and is therefore unlikely to be habitable. If it doesn’t have an atmosphere, it most likely has a temperature below -200°C.

Proxima b was found by analysing the star’s spectra – light broken down by wavelength to provide a “fingerprint” showing what an object is made of. Small shifts in this starlight can be used to work out tiny movements of the star in response to an orbiting planet’s gravitational pull. This is called the radial velocity technique. The first signal was weak. But further observations were made and existing ones reanalysed to verify the planet’s existence.

The history of detecting and understanding exoplanets has been driven forward by a wide variety of techniques. Exoplanets were discovered for the first time in 1992, from radio observations of a pulsar, the collapsed core of giant star.

Efforts significantly grew in 1995 after the announcement of a planet in orbit around the sun-like star 51 Pegasi using the radial velocity technique. This discovery was subsequently awarded part of the 2019 Nobel prize in Physics. There have always been concerns, however, that apparent planetary signals might be caused by stellar activity. It was not until after 2000, and the discovery of the exoplanets with a variety of techniques, that the existence of exoplanets became widely accepted.

Our detection of the new planet, Proxima c, used the same radial velocity technique as that used for the Nobel Prize-winning work, but the signal is 40 times weaker on a 400 times longer timescale. This made it a very challenging discovery. Just like our sun, Proxima has spots caused by regions of intense magnetic activity which are moving in and out of view, changing in intensity on a variety of timescales. These features need to be considered when searching for any planetary signals.

The sun’s spots, probably created by a build-up of plasma, lead to magnetic field flips approximately every 11 years. For the sun this timescale is fairly consistent, but the number of sunspots remain infuriatingly difficult to predict. Unlike the sun, which has been carefully monitored for centuries, we know far less about Proxima Centauri, so it’s plausible that an activity cycle of its star could mimic a planetary signal. Further observations can, however, strengthen the evidence for its existence.

The ideal way to verify its existence would be with a direct image. However, for exoplanets this is exceedingly difficult because they are generally too close to their stars to be seen from Earth with current technology – they drown in the star’s light. But Proxima is a cool, dim star, making the contrast between star and its planets significantly easier. What’s more, the distance and orbit of Proxima c means you should be able to see them both in the sky using large telescopes on Earth.

The signal reported from Proxima c was found with the La Silla Observatory in Chile, an optical telescope with a diameter of 3.6m. The diameter of the Extremely Large Telescope, currently under construction on a nearby mountain, will be 39m and might detect Proxima c with a number of its instruments.

Can we go there?

Proxima c is an ideal planet for follow-up studies compared to other planets discovered around more distant stars. To confirm its existence and characterise its properties will require state-of-the-art technology. That said, Proxima c should provide a benchmark example for how similar or different exoplanets really are from the planets in our solar system.

Since Proxima is the closest star to our sun, one might think it would be easier to just travel there. However, at 4.2 light years, it is still immensely distant for humans. If the distance between the Earth and the sun were 1cm, Proxima is 11km away. That said, an exciting project called Breakthrough Starshot is planning to send a microchip starship to the triple-star system that includes Proxima. Such a microchip starship might be propelled by lasers and reach the system a few decades from now.

Ultimately, the discovery of multiple signals from the very closest star shows that planets are more common than stars. Proxima represents an excellent location for understanding the closest exoplanets and developing new technologies to better understand the universe we live in.