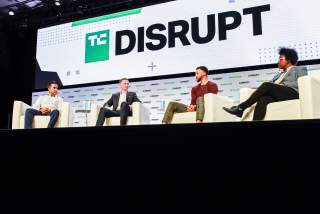 A curious claim: “Subtract venture capital from the landscape of late-twentieth-century innovation, and we would have reached the new millennium with roughly the same technological capacities.” You can find it about halfway through “Is venture capital worth the risk” by Nathan Heller in The New Yorker. Heller’s main point is that, whatever value or benefit venture capital may have provided in the past, today it’s devolved into just another facet of late capitalism. Yes, Silicon Valley is also part of Elizabeth Warren’s “rigged” economy. Self-enriching VCers and WeWork all the way down.

So maybe, then, we should put aside any concern that, say, a left-populist/democratic socialist political agenda of higher taxes and new regulation might spoil the secret sauce of the American free enterprise system. The Golden Age of VC is over anyway. So what’s the harm? Only upside.

Of course, it’s easy to accept the idea that the Golden Age of VC is over when you doubt whether it was really so golden at all. Which brings us back to that curious claim. Which I am not sure even Heller really believes. As he also notes: “Occasionally, though, there is a wild success [with venture capital], and, since the nineteen-seventies, such successes have transformed American business. Venture capital backed Apple and Intel. It funded Google, Amazon, and Facebook before any of them turned a profit.”

Keep in mind: Those occasional, spotty successes are five of the most important companies on the planet with a combined market value of roughly $4.2 trillion. So unimportant are they that Europe releases a white paper only about every week lamenting its lack of such tech titans and fretting about the absence of a venture capital sector as vibrant as America’s.

And with good reason. In the 2015 paper “The Economic Impact of Venture Capital: Evidence from Public Companies,” researchers Will Gornall and Ilya Strebulaev conclude what should be obvious, “From research and development to employment to simple revenue, the companies funded by venture capital are a major part of the U.S. economy.”

Now venture capital wasn’t absolutely critical to every company in that study, such as Microsoft. But for many others it obviously was. As Steven Levy recounts in 2011’s In The Plex: How Google Thinks, Works, and Shapes Our Lives: “[Google’s] original million-dollar funding had been granted solely on the basis of Google’s technology. But [in 1999] the company was already struggling to pay for equipment—its servers were overwhelmed by new users—and Brin and Page needed full coffers to finance their ambitious hiring plans. Venture capital could provide that.” And a similar story from Brad Stone in The Everything Store: Jeff Bezos and the Age of Amazon: “By that spring [of 1996], the company was burning cash hiring and buying equipment and server space, so Bezos decided to raise venture capital.” Maybe we still get a great search engine and smartphone without venture capital, but maybe they arrive much later and never quite as good. Maybe. Big opportunity cost there. Also: What did we miss by not having a large and vibrant VC sector before the 1980s?

And if we want lots more stunning tech innovation that Silicon Valley can then further advance and commercialize (“We wanted space elevators, but all we got was infinite scrolling!”), then we are going to have to invest more in basic science discovery. Strange to put the entire burden of America’s tech future on venture capital.

This article first appeared in AEI.