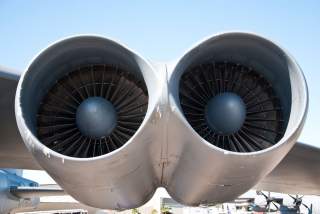 “The aircraft landed safely with no injuries,” said a spokesperson.

A turbofan engine fell off the pod of a B-52H bomber during flight on Jan. 4 last year and the U.S. Air Force (USAF) has completed its investigation into the matter.

It determined that the first stage fan disk of the Pratt & Whitney TF33 engine had failed in mid-air and caused the Number Three engine to break off the wing of the bomber.

According Military.com, the incident occurred during a training flight near Minot Air Force Base (AFB). The engine broke up and debris landed in unpopulated area, they said. No injuries were reported.

“The aircraft landed safely with no injuries,” said a spokesperson.

The five personnel on board the Cold War Era heavy bomber landed back at the base and a UH-1N Huey helicopter was dispatched to recover what was left of the engine.

The aircraft is powered by eight Pratt & Whitney-made TF33-P-3/103 turbofan engines. The Air Force has 76 of the aircraft in its inventory.

The planes are among the oldest in the fleet. Three generations of airmen have flown the B-52 in combat, from Vietnam to Afghanistan, and the newest B-52 is more than a half-century old.

Yet the Stratofortress continues to play a critical role in various theaters around the world.

The B-52 has the ability to stay airborne for a longer duration, have capable sensors to identify targets, and carry a wide-variety of bombs attacking everything from vehicles to large-site targets.

Furthermore since last November the BUFF is equipped with the conventional rotary launcher (CRL) that increases the B-52’s smart weapon carrying capabilities by 67 percent.

The CRL in fact allows the B-52 to carry a selection of different conventional smart weapons or GPS guided weapons inside its bomb bay, increasing the number of weapons carried in combat by eight.

“It’s a big game changer for current and future warfare,” said in November Master Sgt. Adam Levandowski, Air Forces Strategic (AFSTRAT) Armament Systems manager who has been involved in multiple portions of the CRL program. “When you take a B-52 and load it with mixed smart weapons you now open up many more options with one aircraft instead of having to call in other aircraft for other types of munitions. Now, combatant commanders are presented with a much more flexible weapons selection without the need to request additional air support. Before these launchers, the B-52 was not capable of carrying smart weapons internally.”