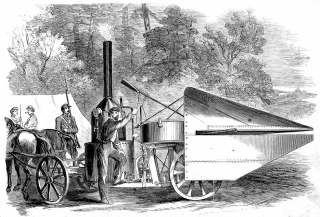 The American Civil War saw more casualties than any other war in which the United States took part. It always could be argued it was the first modern war as it saw the use of trenches, the introduction of armor-clad steam-powered warships that were used in combat and even early attempts at military aviation with spotter balloons.

It was also the conflict in which inventive gun designers sought new ways to make more powerful and effective small arms. While the motivation was as much profit-minded as political, the war produced some weapons that truly go down as concepts best left on the drawing board.

One of these was the Winans Steam Gun, a weapon that wouldn’t seem out of place in a Jules Verne story or in today’s “steam punk” movement. It was part firearm, part steam engine, which gave it a menacing appearance. It was also the largest land-based weapon to be fielded until the First World War’s tanks rolled onto the battlefield.

Unlike previous efforts that increased the rate of fire in small arms and cannons by adding multiple barrels—such as the Billinghurst Requa Battery Gun, which utilized 25 individual barrels placed side-by-side—the Winans Steam Gun used just a single barrel. What it didn’t use was gun powder. Instead its steam-powered engine created a centrifugal force that in theory could fire up to 250 rounds per minute, which far exceeded the typical muzzle loading or even early repeating rifles of the day.

While it is known as the Winans Steam Gun, it was developed by two Ohio inventors, William Joslin and Charles S. Dickinson. The pair patented their design in 1858, but it was found that the hand crank simply didn’t generate enough propulsion necessary to fire a projectile that could do physical harm to an enemy soldier. The pair continued to work on the system but soon a rift caused them to go their separate ways and Dickinson subsequently promoted the weapon under his name.

In Boston in 1860 Dickinson was able to obtain funding to build a working version. Visually it looked like no other weapon of the era. It had a snow plough shaped front, and an engine drive train system that was armored but as much to protect the operator as the machine. It reportedly fired steel shot balls that were fed into a chute but despite what the name suggests steam wasn’t actually used to launch the projectiles. Rather the steam created the centrifugal force.

Dickinson took his prototype to Baltimore and demonstrated it to a curious crowd of onlookers. His choice of location for demonstrating the weapon was notable, as military planners in both the north and south were interested in hardware that could give an army an advantage on the battlefield. With a Civil War on, Dickinson no doubt thought he could find potential buyers.

As it happens the inventor didn’t have to wait long. Following the bombardment of Fort Sumter on April 12, 1861 the nation was indeed in a Civil War, and soon after his gun was pressed into service by local officials. It was taken by the city police to a foundry/machine shop owned by Ross Winans, who also happened to be an inventor.

Winans had actually designed a “cigar-hulled” ship that featured a midship propeller that could allow a boat to progress thought the water with less disturbance from weather or waves. While his inventions didn’t make him a household name he was one of the nation’s first multi-millionaires—not to mention a staunch southern sympathizer and vehement “states’ rights” advocate. Winans thus provided “his gun” to pro-southern authorities where it was used in a very limited capacity to fend off Union troops seeking passage through Baltimore by rail in what has been described as the Pratt Street Riots.

The Winans Steam Gun was subsequently captured by Federal forces of the Massachusetts Volunteers under Colonel Jones, and soon after was taken to Relay, Maryland where it was used to guard the Thomas Viaduct between Relay and neighboring Elkridge. The steam gun was later sent to Annapolis, then to Fortress Monroe and later back to Massachusetts by the troops who had “captured it.” It was put on display after the Civil War.

It was never used in an actual battle, and by today’s standards couldn’t be described as being mobile. However, in the early stages of the war armies still lined up in tight formation, much as soldiers around the world had done throughout most of the 19th century. It is impossible to know how effective it would have been, but the 250 rounds it fired could have made it devastating.

The other “rapid fire” weapons of the era—notably the Gatling Gun or aforementioned Billinghurst Requa Battery Gun—were also far from compact. The Winans Steam Gun could have been utilized on railroad cars or steam ship, where it could have shown real potential.

A Harper’s Weekly article from May 1, 1861 offered a rather favorable view on the weapon’s prospective use in combat:

It can be constructed to discharge missiles of any capacity from an ounce ball to a twenty-four pound shot, with a force and range equal to the most approved gunpowder projectiles, and can discharge from one hundred to five hundred balls per minute. For city or harbor defense it would prove more efficient than the largest battery. For use on the battle-field (the musket calibre engine) would mow down opposing troops as the scythe mows standing grain; and in sea-fights, mounted on low-decked steamers, it would be capable of sinking any ordinary war-vessel.

The one and only original was apparently sold for scrap after the war. However, in 1961 a full-scale replica was built by Civil War enthusiasts Mark Handwerk, Joseph H. Clark and Joseph Zoller III for the Centennial of the Civil War. It isn’t functional, but is currently on public display in Elkridge, Maryland, not far from where the original was used to defend the Thomas Viaduct.